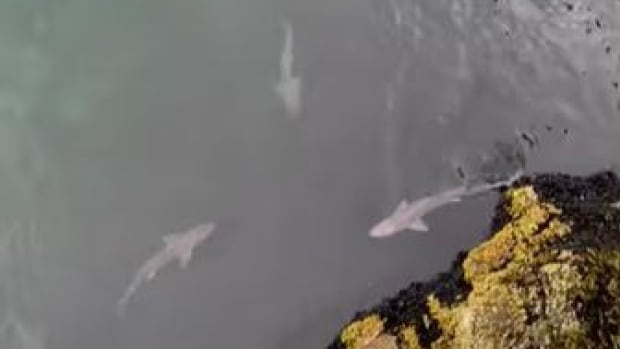 Yes, those are in fact sharks in the viral videos that popped up on social media this past weekend of a swarm of large, grey aquatic animals preying on small silvery fish near Siwash Rock in Vancouver’s Stanley Park.

But unlike Hollywood’s Jaws and Sharknado, these sharks — more accurately known as Pacific spiny dogfish — are harmless rather than hell bent on attacking for a human meal.

“I don’t think people should be all upset and freaked out by this,” said David Caughlan, senior biologist at the Vancouver Aquarium. “I’ve never heard of anyone being bitten by a dogfish.”

“As far as swimmers go… I doubt anybody ever had an encounter with one because if you ever came close it would just skitter away.”

The rare sight was captured by filmmaker and photographer Lukas Hardieck who came across the feeding frenzy at 7:30 a.m. Saturday morning. The videos he posted on social media have been viewed thousands of times.

“My professional photographer friends that have worked for Nat Geo say the video is mind blowing,” said Hardieck. “I knew there were sharks in our waters but I didn’t know they swam that close to the surface.”

Phoenix Lam was running on the seawall when she came upon the scene. Her Twitter video has received over 39,000 views.

“I noticed dogs barking by the water and a family had stopped so I pulled over to look and saw a bunch of sharks swimming around, which is not a normal sight in Vancouver,” said Lam, a former CBC communications employee now with the City of Vancouver.

The name “dogfish” comes from the animal’s instinct to act in a dog-like pack to herd prey together into bait balls for easy pickings.

The videos illustrate the behaviour perfectly, but with a rather ingenious twist: the dogfish use the seawall and Siwash Rock as a barrier to slow their prey from escaping.

“Fish are smart animals and some fish are smarter than others,” said Caughlan. “They’re certainly using the shoreline, especially around Siwash Rock there — it’s kind of a nice little area.”

According to Caughlan, spiny dogfish are plentiful in the Pacific ranging from Baja California to the Aleutian Islands, Hawaii and Japan.

Male dogfish can grow to a metre in length, females to 1.5 metres and they are often caught in local waters by salmon fishers.

Caughlan said the dogfish in the videos all appear to be females hunting young herring.

And while not an entirely uncommon event in B.C. waters, he said the videos serve as a good reminder to keep your eyes open to the wonders of nature, even in the city.

“It’s kind of cool … to be able to see something like that,” he said.