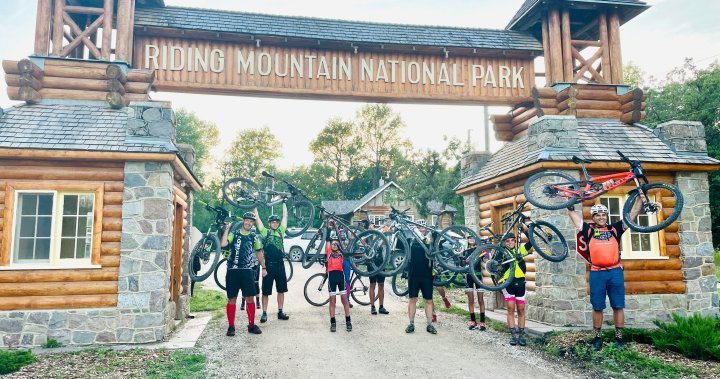 Donations have poured in for a Minnedosa trail park in honour of a young athlete who died suddenly last month.

Non-profit Valley Life Recreation Inc. held a 172 km single-day bike ride across Riding Mountain National Park Saturday to raise money for the park, but also to shine a light on the life of 12-year-old Ole Heie.

“I think anybody that reads this story about who Ole was as an athlete and just how exceptional he was with those around him, be they family, friends, teammates, or competitors, can’t help but be moved by his story and who he was.”

Ternier says about a dozen people took part in Saturday’s ride in Manitoba, which he admits was challenging at times, and some 50 others were waiting to greet them at the finish line.

The idea got started when Heie’s grandmother inquired about making a contribution to the Squirrel Hills Trail Park, which is planned for construction next year, in Heie’s name.

Valley Life Recreation then decided to do a fundraising ride, and aimed to collect $100 for every kilometer they were going to travel.

Ternier says they had received about $13,800 just prior to Saturday, but as word got around, and with people across the country now taking part, he says they quickly eclipsed that goal on the day of the ride, with donations soon blowing past $23,000.

“I can’t explain what happened … this became something so large that none of us could have predicted what yesterday ended up being,” Ternier says.

“It was truly wonderful, and I know I can speak on Rob and Leigh’s (Heie’s parents) behalf, they are absolutely blown away with the outpouring of support for this special event … it meant a lot of things in a lot of different categories.”

According to Valley Life Recreation’s webpage, Heie had made a name for himself in athletic circles after embracing cross-country skiing from a young age. He had more recently completed a single-day 1,000 km ski and his first 50 km ultra-marathon that had an 1,800-metre elevation gain.

But people who knew him were struck by more than his athletic achievements.

“I have a colleague who was expecting and she was out for a run, running around the lake, and Ole was roller skiing around the lake going the opposite direction, and every time he passed her … he’d go ‘good job! You’re doing great!’” said Peggy Snydmiller, from Camrose, Alberta, in a video posted to social media by Valley Life Recreation.

“He’s just so free to give encouragement … my husband grooms the trails, and he was always the first kid to go ‘thanks for grooming the trails,’ … just really concerned about everyone.”

Ternier says he met Heie at a bike park last fall but developed a stronger impression of him in the months following through a social media app for runners and bikers.

“Social media is often given a hard time as having contributed so much negativity to the world, but we can’t ignore the remarkable connections that they’ve also permitted people to create,” Ternier says.

“That was mine with Ole and many of the people around here that connected with him, and of course his connection to the Minnedosa region just further cemented that.”

Ternier says Heie’s hometown is Camrose, but his family’s roots remain in Minnedosa, which is near where a new all-season multi-use park will be built.

“We’re not entirely sure yet, but … we will come up with something that will serve to honour the incredible person that Ole was and ensure that his legacy is known by everybody who, in the future, comes to visit the Squirrel Hills Trail Park.”