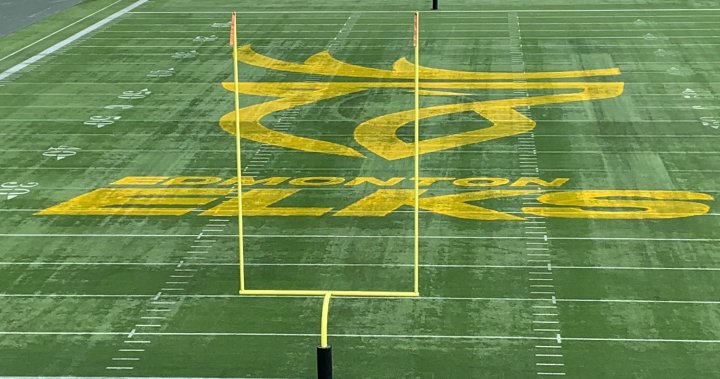 The Edmonton Elks game against the Toronto Argonauts that was scheduled for Thursday in Toronto has been postponed by the Canadian Football League due to COVID-19 cases.

In a statement Sunday night, the CFL said a number of Elks players tested positive for the virus but it did not specify how many plays or who.

The announcement came after the team suddenly cancelled a scheduled practice Sunday.

Read more:
Edmonton Elks practice cancelled due to COVID protocols ahead of home opener against Ottawa

The CFL said the team will not practice or travel until Chief Medical Officers and public health officials have assured the league it is safe to do so.

“This is in keeping with the standard of care for COVID-19 and professional sport. It also reflects our desire to put the health and safety of our players, coaches and staff – as well as public health – above all other considerations,” the statement read.

According to the league, Elks players, coaches and support staff will now be subject to enhanced testing protocol, including isolation.

Edmonton played against the B.C. Lions last Thursday. The Lions will also be subject to enhanced protocol and will be monitored this week.

The statement said Chief Medical Officers do not believe the Lions were exposed to a ‘high risk of infection.”

“We know this is disappointing news for CFL fans, but we are confident they will overwhelmingly support our decision to put safety first,” the league wrote.

It will now work to reschedule the game between the Elks and Argonauts.

According to the CFL’s policy if a game cannot be played because of COVID-19 issues and it cannot be rescheduled then the club suffering from the COVID-19 issues forfeits the game and is issued a loss while its opponent is credited with a 1-0 win.