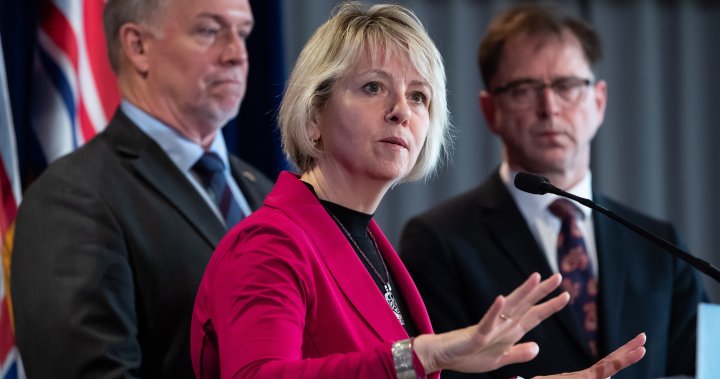 British Columbia is expected to become the second province in Canada to require proof of immunization against COVID-19 to access non-essential services.

Premier John Horgan, Health Minister Adrian Dix and provincial health officer Dr. Bonnie Henry are set to make the announcement at 1 p.m. PT on Monday. It will streamed live on BC1, here on our website, and on the Global BC Facebook page.

B.C. is expected to announce it will work with private businesses on how to ensure people are fully immunized to attend a sporting event, restaurant, movie theatre, concert and many other activities where there is concern COVID could spread.

There will be exemptions for those who are not eligible to be vaccinated, as well as those who cannot be immunized due to medical or other reasons.

1:55
A look at the B.C. communities in the Interior with low vaccination rates

A look at the B.C. communities in the Interior with low vaccination rates

NEW – According to those who have been briefed on the plan, sounds like BC Government will announce on Monday those eligible who are unvaccinated will not be able to access non-essential businesses. Could include movies and restaurants. No details on when it will start. #bcpoli

The spike has been driven almost exclusively by people who are unvaccinated, and has, for now, for mostly centralized in the Kelowna area. But health officials have expressed concerns the virus is moving to surge in other parts of the province.

On Friday, 129 infected people were reported to be in hospital, with 59 in intensive or acute care.

Surgeries were postponed recently at Kelowna General Hospital due to pressure on the system causes by COVID patients.

Monday’s announcement is expected to outline how and when people will be expected to show proof of immunization.

“Everyone needs to understand, I think, in B.C. — and this is an important consideration … there will be significant things you will not be able to do if you’re not vaccinated,” Dix said on Friday.

As of Friday, 83 per cent of eligible people aged 12 and older in B.C. have received their first dose of vaccine, while 74.3 per cent are fully immunized.

The province had planned to move to Step 4 of its reopening plan on Sept. 7, but with the surge in cases, that seems unlikely.

Step 4 is a removal of almost all restrictions, including masks in public indoor settings becoming a personal choice.

“It’s very likely that we won’t be seeing a move to any more loosening of restrictions in the near term,” Henry said Friday. “It’s a very evolving situation, as you know. Over the last couple of weeks, things have changed dramatically.”