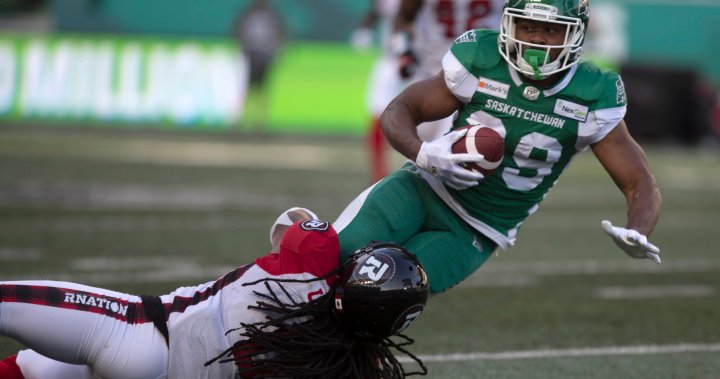 Cody Fajardo was a model of consistency Saturday night, leading the Saskatchewan Roughriders to a 23-10 victory over the Ottawa Redblacks before 28,559 fans at Mosaic Stadium.

Fajardo completed 30 of 35 passes for 321 yards, an efficiency rating of 86 per cent. He also was the game’s leading rusher, gaining 47 yards on nine carries and scoring one touchdown.

While the Riders totalled 397 yards of total offence, getting the ball into the end zone was an issue. Yet Fajardo didn’t allow the lack of red zone success tarnish the victory.

“Touchdowns would be nice but as long as we’re winning football games, like I said earlier, the stats don’t matter,” said Fajardo. “I knew I had to be efficient tonight because of all the zone defence they play so having just five incompletions is pretty good.”

The victory improves Saskatchewan’s record to 3-0, which is tops in the CFL’s West Division. The last time the Riders started the season 3-0 was 2013 when they won their last Grey Cup title.

The Riders were playing without deep threat Shaq Evans, who suffered a broken foot in last week’s victory over the Hamilton Tiger-Cats. Heading into Saturday’s game, Kyran Moore said that although the Riders would miss Evans, the receiving corps has a “Next Man Up” mentality, which was evident with nine different players catching passes in the victory.

“I think one of my favourite things about coach (Jason) Maas’s offence is getting the ball and spreading it around,” said Fajardo. “Teams just can’t hone in on one or two receivers, take them away from us and have us falter on offence. I’m not afraid to throw to anybody. If you’re on the field, an eligible receiver and you’re open, I’m going to try and get the ball to you.”

Brayden Lenius had three receptions for 67 yards for the Riders and Kian Schaffer-Baker had four catches for 64 yards. Moore had the most receptions for Saskatchewan, catching nine passes for 48 yards.

The Riders defence, which entered the game with a league-leading eight sacks, picked up six sacks against the Redblacks. Jonathan Woodard, who had three sacks in last week’s victory over Hamilton, and Garrett Marino had two sacks each with A.C. Leonard and Micah Teitz chipping in one sack each.

“Our defence is playing well. They take the ball away and they are finding ways to make stops when we need them,” said Riders head coach Craig Dickenson.

The Riders had five new players in the lineup Saturday because of injury issues. The list got longer with the addition of defence tackle Micah Johnson (leg) and Jordan Williams-Lambert (shoulder) who left the game and were unable to return. Dickenson wouldn’t speculate after the game how severe the injuries were and how long they would be sidelined.

Saskatchewan scored the first touchdown of the game midway through the third quarter when Fajardo slipped around the right end for a two-yard major, making the score 17-3 for the Riders.

The seven-play, 76-yard drive featured a 30-yard reception by Lenius on the opening play and a 19-yard reception from Paul McRoberts to move the ball to the Ottawa two-yard line. McRoberts caught the ball on the 16-yard line and made a couple of Ottawa defenders miss before being tackled.

The Redblacks got back into the game early in the fourth quarter when DeVon Dedmon, filling in as running back for an injured Timothy Flanders, scored on a three-yard run. Two Rider penalties, one for roughing the passer and another for unnecessary roughness, helped extend the Ottawa scoring drive.

Holding a 17-10 lead, the Riders responded to the Ottawa touchdown with Brett Lauther’s fourth field goal of the game, a 31-yarder.

On the ensuing Ottawa possession, Ed Gainey intercepted a deep throw to the sideline by Redblacks quarterback Matt Nichols, giving the Riders the ball on the Ottawa 37-yard line. The interception set up a 31-yard field goal from Lauther.

A rather pedestrian first half featured three field goals from Lauther and one field goal from Ward. It also featured a rare miss from Ward who entered the game as the career leader in field goal percentage — 97 of 105 (92.4 per cent). Ward was wide left on a 52-yard attempt in the second quarter.

After Lauther and Ward exchanged first-quarter field goals, the Riders put together an eight-play drive late in the first quarter, taking a 6-3 lead on a 19-yard field goal by Lauther.

The drive featured a disputed reception by Saskatchewan’s Lenius. He caught the ball at the sideline, cradling it on his shoulder. As he fell out of bounds, Ottawa safety Antoine Pruneau pulled the ball from Lenius’ grasp. The officials ruled the play a catch, a decision challenged by Ottawa head coach Paul LaPolice. After review, the call stood and the Riders ran two more plays before Lauther’s field goal.

In the final minute of the half, Fajardo connected with Lenius for 10 yards and Schaffer-Baker for 42 yards. Lauther then kicked a 42-yard field goal on the final play of the half to give the Riders a 9-3 lead.

Lauther has yet to miss a field goal this season, successfully hitting on nine of nine attempts in the three victories.

Nichols went 19 of 24 for 176 yards and an interception for Ottawa. R. J. Harris was Ottawa’s top receiver, hauling in five passes for 101 yards.