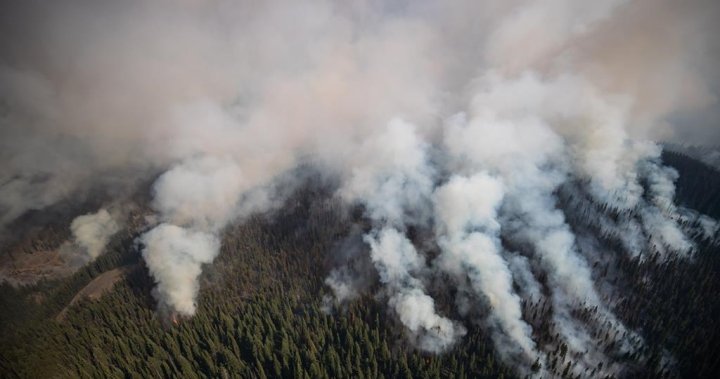 Several evacuation orders have been downgraded as cooler temperatures and lighter winds offer a breather to wildfire crews in British Columbia.

The BC Wildfire Service says there are 250 wildfires burning across the province, but seven evacuation orders have been lifted.

The Kamloops region continues to see the majority of blazes, with the White Rock Lake fire continuing to burn out of control.

But some progress has been made against new fires, such as the first significant blaze of the season on Vancouver Island.

The Cowichan Valley Regional District declared a state of local emergency covering an area west of Ladysmith after a fire was sparked Thursday, but says the fire had been contained as of Friday night.

Evacuation orders and alerts are posted for many of the province’s 30 highly visible or potentially life-threatening wildfires, but Environment Canada is calling for clouds, showers and daytime temperatures down to the mid-teens over the weekend in some areas of the southern Interior.

Meanwhile in Kelowna, the Central Okanagan Emergency Operations says a controlled ignition is planned to help limit the spread of the Mount Law wildfire.

Planned ignitions are when areas are proactively burned to clear away fuel that could potentially help the wildfire grow.

But the Central Okanagan Emergency Operations said in a release that despite the weather relief, conditions remain “very dry.”

“We know residents want to get into the area to either return home or assess damages to their property, but we need to make sure it is safe to do this,” said Alex Van Bruksvoort, the fire chief for North Westside Fire Rescue.

“The need for securing the fire areas couldn’t have been more evident last night. North Westside Fire Rescue while out on patrols came across an outbuilding on fire. It took over two hours to extinguish this fire due to the unknown, flammable products that were kept inside.”

Mounties and a private security company are conducting patrols through the neighbourhood, the agency added, although it did not specify the reason behind that move.

Evacuation orders were downgraded to an alert Friday for more than 650 homes in the Lower Nicola area, west of Merritt.

Residents were forced to leave their homes five days ago due to the Lytton Creek wildfire.

The nearby city of Merritt had its evacuation alert lifted earlier Saturday.

The Ministry of Forests says nearly 8,600 square kilometres have been burned by wildfires since the start of the fire season, and there are more than 3,600 firefighters battling blazes across the province.