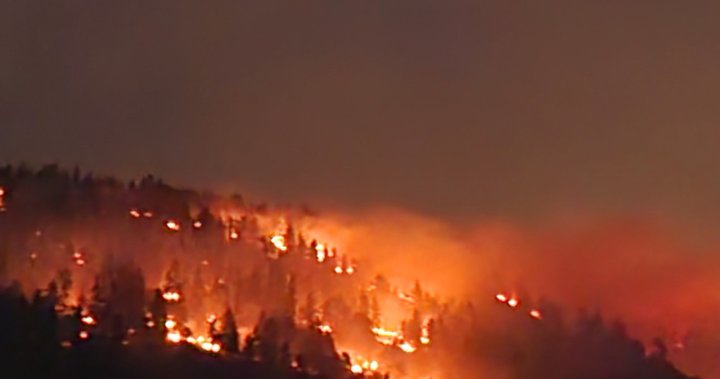 Wildfire crews conducted controlled ignitions on the Mount Law blaze on Friday night and the resulting flames from the planned burn were noticeable from kilometres away.

According to the BC Wildfire Service, the fire, burning on the western edge of West Kelowna, has seen no significant growth in the last 48 hours due to lower temperatures.

Those cooler conditions, said BC Wildfire, allowed crews to perform hand ignitions on a 36-hectare section in a southwest section of the blaze.

BC Wildfire said the ignitions were done to reduce heavy fuel loads between the fire and private property and a fireguard, in addition to its proximity to Highway 97C.

The fire is currently estimated at 800 hectares – the same size it’s been since Monday.

The flames from Friday night’s planned ignitions could easily be seen in neighbouring Peachland and Kelowna.

In fact, prior to the planned burn at 8 p.m., Central Okanagan Emergency Operations (CORE) said just after 6 p.m., that additional smoke or fire may be visible because of controlled ignitions to strengthen fireguards.

“Residents in the area can expect to see smoke and burning materials throughout the next few days as the fire burns near the top of the mountain,” said Brolund, “but residents can be assured that West Kelowna crews, together with Peachland Fire Rescue, are closely monitoring conditions and will control the flare-ups as necessary.”

Read more:
‘It just keeps us going’: B.C. firefighters grateful to Salvation Army for its support

CORE said, “although weather conditions are helping crews, all other existing orders and alerts remain in place.”

A detailed map showing evacuation alerts and orders in the Central Okanagan is available on CORE’s website.

Including West Kelowna, Brolund said there are 33 structural firefighters, 10 trucks and equipment on the firelines.

“They’re continuing to extinguish hot spots and flare-ups around homes within the fire perimeter in order to make the areas safe with the goal of eventually rescinding the evacuation order,” said Brolund.

“BC Wildfire crews continue to action active fire areas on the hillsides with both air and ground support.”

If residents witness any spot fires, they are asked to call 911 immediately.

Brolund also noted that the fire department is thankful for the generous support it is receiving. But he noted they are unable to accept donations of food or other supplies.

Instead,” he said, “we would really rather residents and property owners help us protect their properties by practicing fire-smart techniques.”