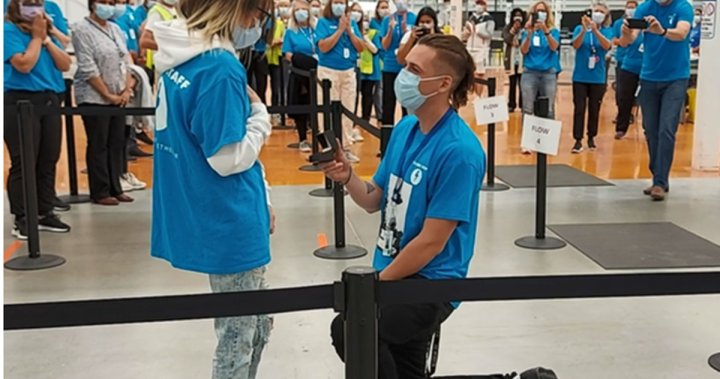 A couple from Guelph, Ont., have gone viral after they got engaged earlier this week at a COVID-19 vaccination clinic they both worked at in Cambridge.

Ryan Galway, 24, surprised his girlfriend of six years, Jocelyn Rauchfleisz, 24, with a proposal at the Pinebush Vaccination Clinic on Monday.

Read more:
These Canadians popped the question during a pandemic: ‘It made it even better’

“A few months ago, I’d brought up the idea to propose to her at the clinic because we have so many friends and basically family now that work there with us,” Galway said.

Rauchfleisz went to work and thought she was doing a TV appearance when in fact a proposal was afoot.

“We had our morning touch base and they pretty much corralled me into the area,” she explained as her co-workers then gathered for what appeared to be a group photo shoot. She began to back up as she did not want to be front and centre in the photo.

“And then when signs started coming up, I really actually didn’t think it was for me because Ryan was supposed to be on a fishing trip,” she said. “So I then started backing up even more, a little worried.

“And he came around the corner and it just it all fell into place.”

This couple of 6 years began working at the vaccine clinic this winter and, having made so many wonderful new friends, Ryan thought it was the perfect place to propose… and he was right! There wasn’t a dry eye in the house!

Galway said he had a special clinic shirt printed for the occasion with an X-Files poster which read ‘will you marry me?’ rather than ‘do you believe?’.

“So then when I walked up, she saw that,” as he got on his knees and popped the question.

“I hugged him because I couldn’t even say ‘yes’. I was so flustered and shocked,” Rauchfleisz said.

“I realized, ‘Oh shoot, there’s so many people looking at us right now.’ I was like, ‘Yes, yes, give them an answer,’ because I don’t want keep him sitting there on his knee looking up at me.”

The couple’s boss, Lisa Anstey, said their co-workers were thrilled to witness the moment.

“I think it was amazingly romantic. There was not a dry eye in the house,” she said.

Rauchfleisz said it has been an a little bit of a whirlwind as they have responded to may media requests.

“It’s been it’s been exciting and amazing,” she said.

The couple have been dating for six years now and say it will be a couple of more years before they actually get hitched.

“We’re going to hold off for a few years, get some planning out of the way,” Rauchfleisz said.

“Hopefully by the time that we do plan the wedding, we can be in groups of people again.”