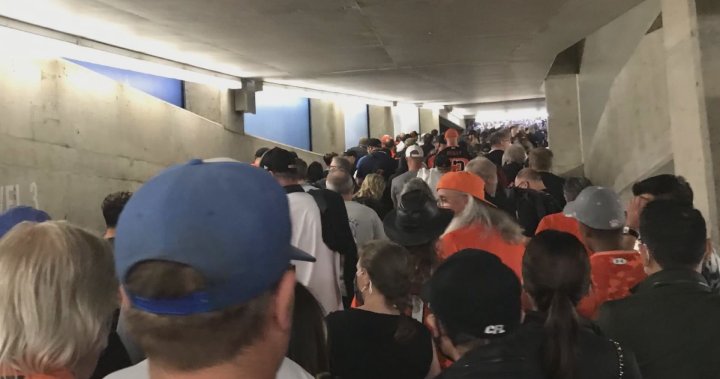 BC Place stadium is making changes in the wake of criticism of its COVID-19 safety protocols at the end of Thursday’s BC Lions game.

An estimated 12,500 fans attended the first football game at the stadium in more than a year, to witness the Lions fall to the Edmonton Elks.

But it was what happened after the game that drew complaints.

“At the end of the game and we had to get out of the building, suddenly there were exits that weren’t there that were there as entrances, it was very curious,” Business in Vancouver publisher Kirk LaPointe, who attended the game, told Global News.

“And what it meant was there was a real crush of people going up the ramp that I was going out of on the west side of the stadium, and people were grousing about it, they were upset.”

1:54
Lions welcome back fans to BC Place Stadium

Lions welcome back fans to BC Place Stadium

LaPointe posted a photo of hundreds of fans jammed together on one of the exit ramps to social media, which prompted others to share their concerns.

“They forced everybody to close-quarter march in a herd.”

Masks were not mandatory for fans attending the game, and LaPointe said many of those in attendance were not wearing them.

He said that wasn’t an issue for most of the game due to safety protocols in place, but the situation changed when people tried to leave.

“This just wasn’t in keeping with the way the rest of the event was staged, which I though was being done pretty responsibly,” he said.

2:00
COVID-19 restrictions expanded to cover all of Interior Health

COVID-19 restrictions expanded to cover all of Interior Health

In a statement, BC PavCo, the Crown corporation that operates the stadium, acknowledged concerns and said it was updating its exit protocols.

“As many guests exited the building at once at the end of the game, it was congested in certain areas of the venue,” PavCo said.

“Going forward, BC Place will ensure there is access to all of our doors at the end of events.”

Those protocols will get their next test on Saturday, when the Vancouver Whitecaps play their first match on home turf in more than 500 days.

Whitecaps director of events and service experience Jon Rees said safety and security of fans will be the top priority.

“Exiting through your closest door has always been the messaging we have used for every game, so that has not changed,” he said.

“Every exit will be open on exit at the end of the match.”