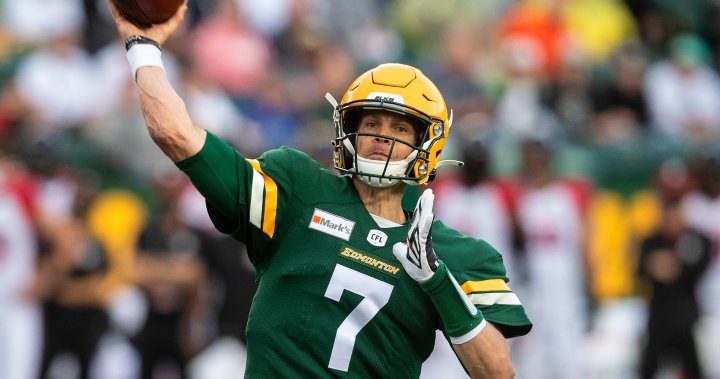 A new local owner in attendance. Fans back in the stands. There were plenty of reasons to party at B.C. Place on Thursday, but the visiting Edmonton Elks spoiled the festivities by notching their first victory of the CFL season with a 21-16 win over the B.C. Lions.

“It definitely helps when you have some film to study and film to prepare — I think that was one of the big differences,” Elks head coach Jaime Elizondo said after the game. “I thought the O-line played really well and they gave Trevor plenty of time.”

Elks quarterback Trevor Harris went 26-for-31 and passed for 296 yards, including a 10-yard second-quarter touchdown and one interception.

Kicker Sean Whyte went 4-for-5 on field-goal attempts and Edmonton was awarded a safety midway through the second quarter.

Michael Reilly was held to just 128 yards, completing 15-of-25 passes for B.C. He was credited with the home side’s lone touchdown and was sacked three times.

Read more:
Edmonton Elks look for win No. 1 when they host Montreal Alouettes on Saturday

After starting the campaign with a pair of home-field losses, the Elks improved their record in the abbreviated 14-game season to 1-2, while the Lions fell to 1-2 with the loss.

Off the opening kickoff, the Lions looked ready to bring the party to their home field. They jumped out to a 3-0 lead after new free-agent signing Camacho hit on his first-ever CFL field-goal attempt, scoring from 49 yards out after a 57-yard opening kickoff return from Chris Rainey.

Edmonton’s first points of the game came with 7:40 left to go in the first quarter, when Whyte’s 52-yard field-goal attempt bounced off the crossbar and into the end zone.

The Elks dominated the second quarter, outscoring the Lions 12-0.

With 10:05 left before halftime, Edmonton took the lead when Mike Jones caught a 10-yard touchdown pass. That capped off a seven-play drive that started on the Elks’ two-yard line and included a pair of costly penalty calls against B.C. defensive back Jalon Edwards-Cooper.

Thanks to a safety and a field goal, the Elks’ lead grew to 15-4 by halftime.

The two sides exchanged field goals early in the third quarter before the Lions notched their only touchdown of the game.

Video review was required to determine that Reilly had carried the ball over the goal line with a one-yard quarterback sneak that capped off an eight-play drive. Reilly’s pass attempt for a two-point convert was incomplete.

More field goals were exchanged in the final frame, but B.C. was unable to narrow the deficit to less than two points.

“Digging an 0-2 hole early, especially with the expectations that we have of ourselves and this team, was very disappointing,” Elks defensive end Jake Cerezna said. “And to just get a ‘W’ in the win column and to do it in that fashion where we played great on defence, special teams and offence — it feels good!”

The game was a penalty-filled affair for both teams. Edmonton was assessed 12 penalties for 137 total yards, while B.C. was whistled for 13 infractions for 122 yards.

NOTES: Thursday marked the Lions’ first game at B.C. Place since Nov. 2, 2019. New team owner Amar Doman was on hand to welcome fans back to the stadium, one day after it was announced he had purchased the team from the estate of late owner David Braley. B.C.’s provincial health officer Dr. Bonnie Henry was on hand and addressed fans during the third quarter.