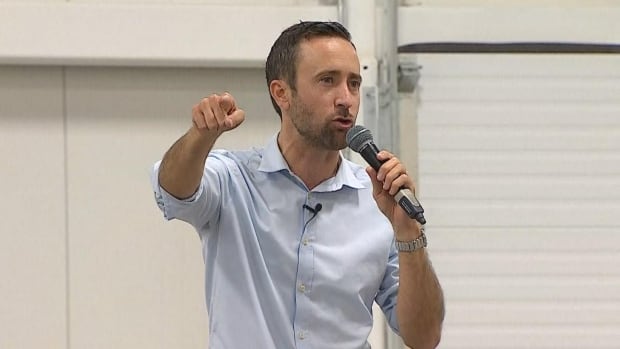 Independent candidate Derek Sloan, who was booted from the federal Conservative caucus after a known white nationalist donated to his campaign, says he’s trading the Ontario riding of Hastings-Lennox and Addington for an electoral district in the Calgary area.

“This is going to be a barometer of the status of freedom,” Sloan said during an event held in Cochrane, Alta on Thursday evening.

Sloan, who was elected MP for the Ontario riding in 2019, was a former candidate for the Conservative Party leadership before being knocked out in the first ballot.

In January, Conservative Leader Erin O’Toole pushed for the ouster of Sloan from caucus after news dropped that Paul Fromm, a white nationalist, donated $131 to the MP’s leadership campaign.

“Derek Sloan’s acceptance of a donation from a well-known white supremacist is far worse than a gross error of judgment or failure of due diligence,” O’Toole said in a statement at the time.

Sloan responded, saying his team couldn’t vet every donation that came in for his leadership campaign.

Now, Sloan will attempt to contest the district of Banff-Airdrie, which is held by Blake Richards, a Conservative who is seeking his fifth term.

Sloan said he wouldn’t be contesting the riding under the banner of the western separatist Maverick Party or under Maxime Bernier’s People’s Party of Canada, instead running as an Independent.

“God bless both of those parties. But let us have this slice of the pie, because we’ve done our homework,” Sloan said. “It’s going to be Blake or me. The NDP or Liberals cannot win. There’s no way. There’s no way.”

Historically, Independent MPs have had difficulties seeking re-election after leaving or being booted from party caucuses. Since 1974, only five MPs have been re-elected in that circumstance.

Mount Royal University political scientist Duane Bratt said it was likely Sloan was targeting rural Alberta with the assumption it runs more conservative than any other part of the country.

“But he’s still got that problem, about running as an Independent in a riding that he’s visiting,” Bratt said. “There’s nothing legal against it, but are voters going to care?

“It’s very difficult to win as a marginal party or as an Independent at the best of times.”

Doreen Barrie, an adjunct assistant professor of political science at the University of Calgary, said many hold the view that Alberta is a hotbed for libertarian, hard-right views — a view she called inaccurate.

“I think his chances would [be] slim to none. [He] might attract some votes, but there’s a very small market for these ideas in Alberta,” Barrie said.

“I noticed he’s using this Trumpian vocabulary. That’s intended to attract these kinds of voters, but I don’t think this is going to be successful.”

Barrie was referring to Sloan’s use of the slogan “Make Alberta Great Again” in an initial campaign email.

Derek Sloan says the people of Banff-Airdrie aren’t going to know what hit them. <a href=”https://t.co/NnXFqwhw8j”>pic.twitter.com/NnXFqwhw8j</a>

“This is not the hallmark of a conservative party,” Sloan said. “In fact, it’s clear that all the legacy parties are corrupt.”

Alberta has long been a stronghold for the Conservative Party in federal elections. All but one of Alberta’s 34 electoral districts were won by the Conservatives in 2019.

Aside from the Conservative Party, Sloan will also face competitors in Banff-Airdrie that may share similar perspectives. The Maverick Party plans to run Tariq Elnaga in the district, while the People’s Party of Canada will run Nadine Wellwood.

Bratt said there were a “growing number of hardcore conservatives” who are upset with O’Toole and the Conservative Party — but spreading those voters across three candidates might prove difficult.

Despite the emergence of the Maverick Party, pundits said the potential of any major shakeup for the Conservatives in Alberta is unlikely.