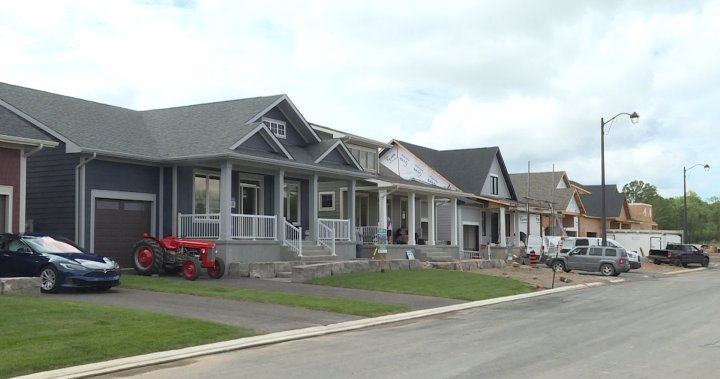 The construction of a new net-zero subdivision is underway in Westport, Ont.

Ontario Minister of Municipal Affairs and Housing Steve Clark says it’s the future of development for small communities. Clark was in the village on Thursday, where he touted the environmentally-friendly way of building in rural areas.

The builder says the energy efficiency is accomplished a few different ways.

“They’re ready for solar panels, but just as they are they’d save the average consumer perhaps 50 to as much as 80 per cent of their energy costs,” said Steve Rolston, founder of Land Ark Homes.

Rolston says the the location for the development was planned with the idea that many Westport amenities are less than a kilometre away, helping further reduce the carbon footprint for prospective residents.

Another thing that gets these homes to net zero energy is they are built airtight, to the point that they exceed the Ontario building code by a factor of eight times.

The Watercolour community development in Westport is being done in four one-year phases averaging about 25 homes each year. The price tag of the first phase is just under $700,000, raising the question of affordability.

The mayor, however, says the next phase should address some of those concerns.

“We want young families — we’ve got two schools, you know, so we certainly want to make sure the housing is affordable enough for young families and we keep the schools filled,” Westport Mayor Robin Jones said.

All involved are hoping is that this type of development can become a model for similar communities elsewhere.