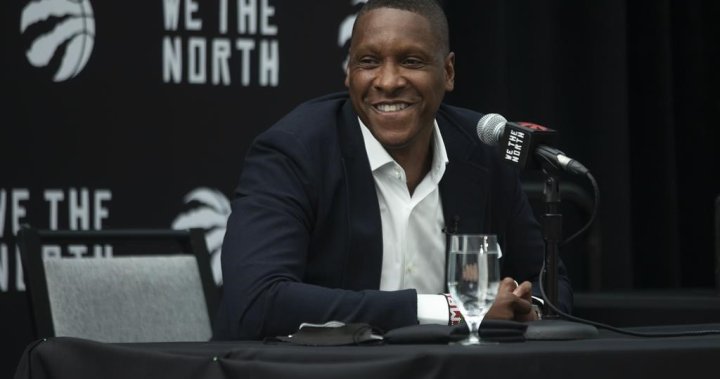 After a season spent in Tampa, Fla., that he said was difficult on the staff and players and set the franchise back “a couple of years,” Ujiri said the Raptors aren’t talking about calling anywhere but Toronto home this coming season.

And the Raptors president and vice-chairman said there are hopeful signs they’ll play out of Scotiabank Arena.

Ujiri added that he’d told the Raptors ownership group, NBA commission Adam Silver and “even Prime Minister Trudeau that playing away set us back a couple of years . . . Playing another year somewhere else will set us back five years.”

Ujiri addressed the media live in Toronto for the first time since the pandemic struck in mid-March of 2020. He said it was nice to see live faces, albeit masked. He said it will be nicer when everyone can watch basketball together again in Toronto.

The Raptors were forced to relocate to Tampa, Fla., last season because of Ontario’s COVID-19 protocols and border restrictions. They set up a temporary training facility there in the span of two weeks, amid myriad headaches such as finding housing, childcare, schools, etc. Despite being the only team forced to play outside their market, the Raptors were poised for a playoff spot before a major March COVID-19 outbreak saw them plummet down the standings.

“Everybody we had to work with to get to do this (move to Tampa), that experience we’ll honestly never get again first-hand,” Ujiri said. “I hope it never comes again. (But) there are many things we’ve learned from this. In terms of the players now, in terms of the team, it was hard for some of them, if not all of them. It’s not easy.”

Ujiri says he and his staff are in regular talks with municipal and provincial health authorities as well as Prime Minister Trudeau – with whom Ujiri said he’s been friends since before Trudeau took office.

He pointed out the NBA’s season schedule will be released within days and it says “Toronto” for the Raptors’ home games.

Maple Leaf Sports & Entertainment Ltd., which owns the Raptors among other teams, announced Tuesday that fans must provide proof of vaccinations or a negative COVID-19 test to attend games this season.

Ujiri himself was one of the biggest question marks of the off-season. While head coach Nick Nurse and GM Bobby Webster had signed contract extensions months earlier, Ujiri didn’t until last week. He also added vice-chairman to his job title. When asked what that meant Wednesday, he said it’s about a more global reach, and touched on topics such as social justice issues and NBA Africa.

“And vice-chairman is sexy, it’s cool,” he added, with a laugh.

Ujiri said the deal was done at the 11th hour because he didn’t want to be in negotiations during the season.

“Negotiating is difficult, that’s what comes in the terrain. Me and my family really looked at this and you get different offers that come to you but it comes (to) a point where you have to weigh those options and what’s best as a family and for me,” he said. “Everything we went through always came back to Toronto and what Toronto means to me as a city. I call it home.

No details on length of contract were released when Ujiri signed. How long will he be part of the Raptors’ franchise?

“Forever,” he said with a loud laugh. “Put pressure on Larry (MLSE chair Tanenbaum, who was seated in the front row). Forever, man. I’m home, man. This is it. We’re going to try to win the best way that we can. It’s a commitment.”

Lowry joined Miami this off-season following a sign-and-trade deal with the Heat, ending the 35-year-old’s wildly successful nine-year run in Toronto that included six all-star appearances and a championship in 2019.

Ujiri said he wishes Lowry all the best in Miami, except when he faces his former team. Asked about whether Lowry will get his jersey retired in Toronto, Ujiri said: “He’s going to get everything, and then some.”

“It’s been really tough for us to see an incredible player like that go,” Ujiri said. “We knew this was coming. The direction of our team was kind of going younger and Kyle still has these incredible goals.”

This report by The Canadian Press was first published Aug. 18, 2021.