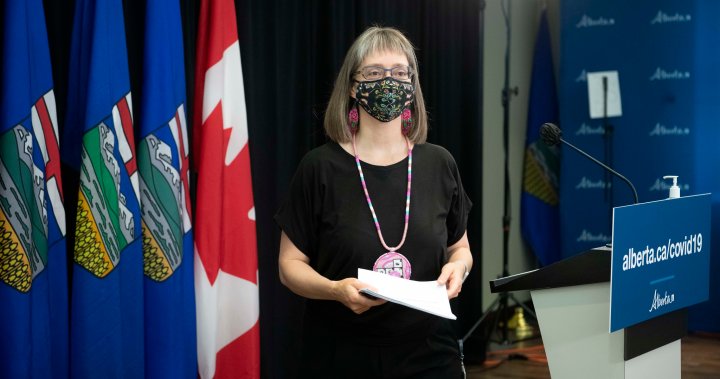 Scientific evidence and data the Alberta government said was used to justify the removal of COVID-19 protocols has been delayed yet again.

The data was supposed to be released to town hall attendees Wednesday night but Hinshaw said it is taking longer to compile given the decision last week to keep protocols such as masking, testing and isolating in place until at least Sept. 27.

“We just haven’t had the chance to finish synthesizing and putting together the evidence summary for public release yet,” Hinshaw said.

“That work is underway. It is a priority.

“I know many of you have expressed interest in seeing not just single pieces of evidence here and there but a package that really articulates the evidence on which the decision to shift our focus was grounded, but that is coming.”

The announcement by the province at the end of July to remove testing, tracing and isolating was met with outcry from residents, Canada’s top doctors, as well as professional organizations such as the Alberta Medical Association and the Canadian Paediatric Society.

There was frustration and pointed questions from attendees over the province’s general approach to the pandemic, stricter provincial guidelines around masking rules, and upcoming changes to COVID-19 protocols.

Concerns were also raised by town hall attendees that the evidence to support the latest changes is still not public.

“The work that’s required isn’t just that list of articles. It’s trying to put it together into a narrative mode that helps explain not just to you as my peers, but to all Albertans, that list of considerations that were taken into account,” Hinshaw said.

“The information isn’t secret information. We compiled a whole bunch of different resources we used that are publicly available.”

Hinshaw said she understands there is a “keen interest” in the province’s modelling data.

“In the interest of being able to release the package without releasing things in piecemeal, we want to be able to put that together into a comprehensive overview,” she said.

“I’m sorry it is not available. Unfortunately, this is not something I can do by myself, and it’s also something we can’t release without moving through all of the processes that are necessary in government.”

The province has made similar commitments to releasing data in the past that have yet to be followed through on.

On Jan. 20, Hinshaw said sector-specific transmission data would be released to Albertans. However, five months later, on May 13, that information was still not available.

“As our analytics team is a limited group of people, they’re doing a lot of work every day. Some of the reports we had been working on preparing for public release has slowed down a little bit — one of those is, unfortunately, that sector-specific report,” Hinshaw said on May 13.

At Hinshaw’s last regularly scheduled COVID-19 update on June 29, Global News asked again when that data would be shared publicly. Hinshaw said at that time she would look into it but did not know when it would be released.

As of mid-August, that information has yet to be disclosed to Albertans.