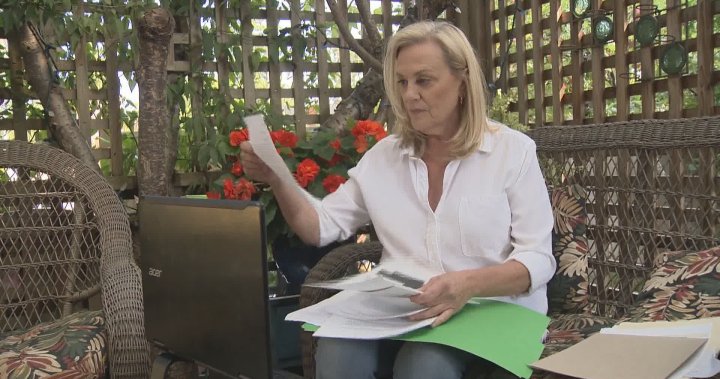 A B.C. woman who was unable to work after a car crash is highlighting what she says is an “unjust” flaw in ICBC’s new no-fault insurance program.

Donna Yurkovich was rear-ended by an on-duty police officer in Delta at the end of June, leaving her with whiplash and a spinal injury.

The injuries were severe enough that Yurkovich, who is a self-employed registered massage therapist, had to take two weeks off work and only returned part-time afterward.

“My job is incredibly physical, so I wasn’t able to just push through and go back to work after being hit that hard,” she said.

But Yurkovich told Global News she got a nasty surprise in July, when she learned that ICBC would not cover one week of her lost wages, and would pay out the remainder at 90 per cent.

“That’s a lot of income to me. I’m a single income household. I do not have extended care. It’s not (covered under workers’ compensation), I don’t have EI. I don’t have sick days or other benefits to claim — unlike the police officer who hit me, I’ll mention,” she said.

Making matters worse, Yurkovich said she has been buried in red tape trying to prove her income from last year — which was already lower than normal on paper, due to COVID-19 lockdowns.

2:12
ICBC’s no-fault insurance model under fire from cyclist who says there are serious gaps in the system

ICBC’s no-fault insurance model under fire from cyclist who says there are serious gaps in the system – Aug 6, 2021

The model removes the right of drivers to sue in most cases, caps minor injury payouts, provides direct coverage for medical and rehabilitation benefits and replaces some lost income.

“If you’re hurt in a crash and unable to work, Enhanced Care will help you continue to cover your daily costs and bills, paying 90 per cent of your net income up to $100,000,” the insurer said in a statement to Global News.

“There is a seven-day waiting period before income replacement kicks in.”

“People are not making maybe what they used to or they are trying to catch up for lost income, so it is creating a vulnerability,” she said.

People who are students, early in their career or working part time are also penalized by their inability to seek lost future income, as the formula locks them in to their pre-crash income, she said.

“Historically what would happen is people would be able to consult the assistance of a lawyer or an advocate to help them manage the paperwork, and then the shortfall would be recovered at the end of the healing period, or if absolutely necessary going through the process of a lawsuit,” she said.

Yurkovich said she’s speaking out in the hopes of raising awareness about the gap in coverage, which she feels was buried in the rollout of the new program.

“This one is completely outrageous, it’s unfair,” she said.

“In fact, its completely reprehensible what they’re doing.”