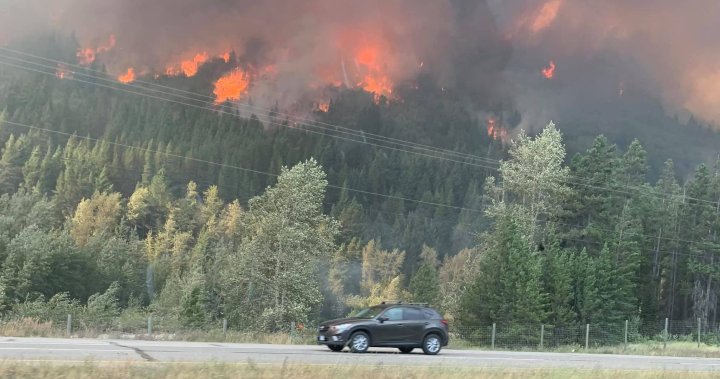 B.C. Public Safety Minister Mike Farnworth says the province will not issue specific orders under the provincial state of emergency to ban travel to areas impacted by wildfires.

Instead the province will continue to advice people to stay out of the Interior, including Kamloops and Kelowna, he says.

“Now is not the time to travel to the Okanagan or Kamloops with the current fire situation. People should postpone those travel plans or look to go elsewhere,” Farnworth said.

“First off, go online and look before you go. If you have been watching the news you know there are a lot of communities under evacuation alert and evacuation order.”

During the height of COVID-19 restrictions the province put in road blocks to ensure travellers did not travel from one health zone to another.

When asked on Tuesday about whether the province would consider the same for fires, Farnworth said he did not believe those measures were necessary.

“We are not looking at road checks for travel. What we have done is put out the travel advisory,” Farnworth said.

But the province’s lack of orders is putting travellers in a difficult position.

Sara Redpath booked a VRBO to travel to Kelowna from August 27 to September 4, with her husband and two kids.

The cancellation and refund period expired July 31, so she is worried that if they cancel now they may lose close to $3,000, unless the owner is unexpectedly willing to refund or negotiate alternative dates.

Redpath said she would like to see the province issue specific orders that would make cancelling clear for both those renting out the spaces and those hoping to stay.

“If we cancel and there are no orders in place there is a lot of second guessing for everyone involved,” she said.

3:08
The devastation and heartbreak of the White Rock Lake fire

The devastation and heartbreak of the White Rock Lake fire

Connor Molineaux is in a similar situation. He is travelling with a group of friends from Kelowna from this upcoming Saturday through to Aug. 26.

They have booked through Kelowna Resort Accommodations. The company has posted on its website that they will not be altering the cancellation policy even with the provincial guidance.

“We know in these difficult times you have concerns about travelling to Kelowna and we also recognize your safety in coming to Kelowna at this time,” the website reads.

“DKRA at this stage are not offering refunds for current or upcoming bookings and are not able to push bookings to other times this year or next.”

Molineaux booked months ago knowing that the pandemic might still cause problems, but the rental company at the time had promised that if pandemic restrictions were imposed again, the reservation could be cancelled.

But the company is not doing the same due to the fires.

“Now we are in the position that the wildfire situation in Kelowna makes our trip appear untenable. We know it isn’t a good idea to visit right now for our own safety, not to mention the evacuees from the Interior who need shelter and access to highways,” Molineaux

“We are sickened to think that there are evacuees who might not have somewhere to stay who are sleeping in their cars while the condo we booked sits empty and the company collects their cheque.”

Farnworth says the B.C. Hotel Association has been working to ensure people can cancel, but the problem lies with vacation rentals and smaller operators.

“We have been working very well with the hotel association. Where we are seeing the problem is mainly in independent things like VRBO and Airbnb. I think it’s really unfortunate. What I think we will see is people remembering that,” Farnworth said.

“I think you will have places like that that will lose business over the long term.”