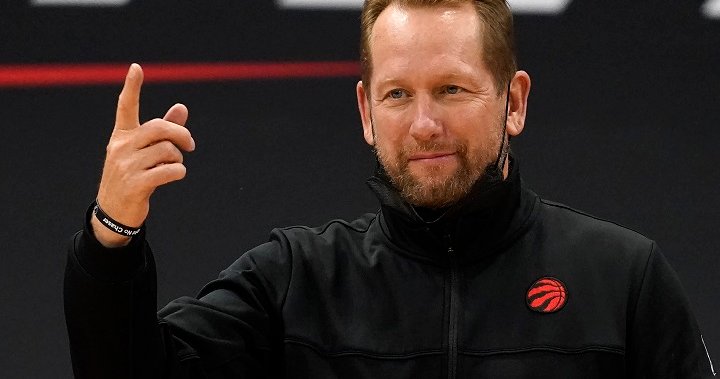 TORONTO — There were plenty of moments when Nick Nurse was watching the Tokyo Olympics that he couldn’t help but imagine Canada playing there.

Nurse and the Canadian men’s basketball team had to watch the Olympics from afar after Canada failed to qualify, but the coach said seeing the continuity, commitment and culture of excellence entrenched in the teams that did get to Tokyo led to important conversations with his players.

On Monday, Nurse signed a three-year contract extension as Canada’s head coach through the 2024 Paris Olympics. He’d like a similar commitment from Canada’s best players.

“But the most interesting thing for me was a lot of communication back and forth via text with the players who had just played in Victoria (in the FIBA last-chance qualifying tournament), we talked about the teams that had been together for a while and we kept seeing the same theme.”

The 54-year-old was hired as Canada’s head coach in 2019, the same year he led the Toronto Raptors on their historic NBA championship run. Boasting the best NBA depth in Canadian history, hope for the national men’s team ahead of Tokyo had been at an all-time high.

But Canada’s hopes evaporated in a 103-101 overtime loss to the Czech Republic in the semifinals of their last-chance qualifier. That heartbreaker ended a crazy three years that saw a revolving door of more than 30 players help Canada qualify for the 2019 World Cup in China.

Canada could have qualified for Tokyo in China, but with just two NBA players — Cory Joseph and Khem Birch — on that roster, Canada finished a disappointing 21st.

While there are obvious chunks of games that eliminate NBA players due to conflicts, such as early World Cup qualifying windows this November and February, Nurse would like the core group of the country’s best to commit to at least playing the next couple of summers together.

“It would not be a revolving door, it would be the exact opposite of what we did in the last three years,” Nurse said.

Nurse said while it took a couple of days for the heartbreaking elimination to sink in, “the road for us to Paris started about 48 hours after the Victoria Olympic qualifying tournament.”

A three-year commitment from the coaching staff and the players is the key to maximizing Canada’s talent, he said.

“Part of what we’re building here is that culture, a lot of those countries have the culture where these guys play together, stick together, bond together and it becomes like a brotherhood for them to play,” Nurse said.

Nurse said he’s seen commitment from players grow in the weeks since Victoria. He met with 11 Canadian players in Las Vegas during NBA Summer League.

Canada’s lack of chemistry, which was compounded by COVID-19 and the inability to travel for any exhibition games before the qualifier, was evident against the Czech Republic, Nurse said.

Nurse’s communication with players has centred around having a core group of players, and committing to games together every summer. The goal would be to clinch a Paris berth at the 2023 World Cup, rather than leaving it up to a last-chance qualifier again.

Rowan Barrett, the general manager of Canada Basketball’s men’s program, said the post-Victoria debrief plus the Tokyo Olympics provided a great lesson learned about maintaining consistency. Signing Nurse to an extension was a key.

“With the diversity within our international play with our pros all over the world and in the NBA, Nick has those experiences,” he said. “Nick clearly is a winning coach but I also think what we saw play out was the continuity that’s necessary for a team to succeed.”

The Canadian team went 2-3 at the World Cup in China, leaving the last-chance qualifier as its final hope of a Tokyo berth. Then a Canadian squad featuring eight NBA players, including RJ Barrett, Andrew Wiggins and Nickeil Alexander-Walker, dropped the heartbreaker in the semis.

“When Rowan and Glen (Grunwald, Canada Basketball president and CEO) gave me this job a couple of years ago and they said, ‘Get us on the podium,’ this to me is the formula,” Nurse reiterated on commitment. “Get this talent and keep them together, and let this team reach it’s potential and then we can let the chips fall where they do a little bit.”

The Canadian men haven’t played in the Olympics since the 2000 Sydney Games.

Canada’s women’s team made its third consecutive Olympic appearance in Tokyo, but experienced heartbreak of a different sort. After making the quarterfinals in both London in 2012 and Rio in ’16, Canada didn’t make it past the group stage in Japan.