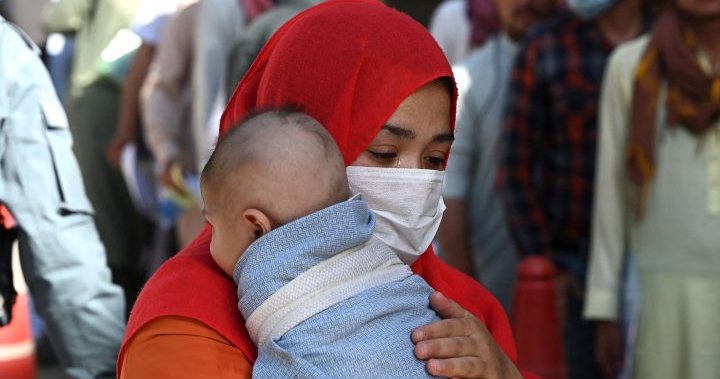 Just days after the Taliban took control over the northern city of Kunduz in Afghanistan last weekend, an Ontario man called his brother’s house to check up on their family’s well-being.

“They told me they don’t have any food,” the Afghan-Canadian told Global News. He sent them $1,000, but said the family has been unable to collect the amount as the situation deteriorated in the city.

In a matter of a week, the Taliban group has wrestled back control of the country from the Afghan government, capturing all the major cities, including the capital this past Sunday.

Now, Afghan families living in Canada are fearful for their relatives back home and are eager to help them escape the country.

The family in Brampton, Ont. — which moved to Canada in November of 2000 as refugees from Afghanistan — told Global News their relatives in Kunduz are in “great danger.” Their names have been withheld to protect the safety of themselves and their relatives.

“Everyone at this point is just hiding and trying to protect themselves,” said the 16-year-old daughter.

“They just have been living their life in fear and it’s really upsetting for my family.”

0:42
Afghanistan crisis: Desperate locals cling to side of US Air Force plane taking off from Kabul

Afghanistan crisis: Desperate locals cling to side of US Air Force plane taking off from Kabul

Her uncle, aunt and baby cousin have already been killed by a bomb that hit their home, she says.

One of her female cousins, a 23-year-old student at Kunduz University, has been a vocal advocate of women’s rights in the country. She has been communicating with her Canadian relatives and giving them updates about the current situation on the ground as the Taliban have taken over in Afghanistan.

Like many other Afghan women, she is also concerned if she will be able to continue her studies in English literature. She often spoke at public conferences and undergraduate seminars at the universities in Kunduz province.

“Now that the government is in the hands of the Taliban, I have been under threat and my life is in danger,” she wrote in her letter.

Under the previous Taliban rule between 1996 and 2001, women could not work, girls were not allowed to attend school and women had to cover their faces and be accompanied by a male relative if they wanted to venture out of their homes.

However, Taliban spokesman Suhail Shaheen dismissed the concerns for women, saying in an exclusive interview with BBC Sunday that Afghan girls and women will have access to education and work, but will be required to wear a hijab or head covering.

2:02
The world “cannot and must not” abandon the people of Afghanistan, UN secretary-general says

The world “cannot and must not” abandon the people of Afghanistan, UN secretary-general says

Amid heightened concerns, Canada announced on Friday it will be expanding its humanitarian efforts to help resettle more than 20,000 Afghan refugees, including journalists, human rights activists and public servants — many of whom have worked alongside Canadian officials in Afghanistan.

“We are heartbroken at the situation the Afghan people find themselves in today,” he told reporters outside of Rideau Hall in Ottawa.

On Monday, United Nations Secretary-General Antonio Guterres called on the United Nations Security Council to “use all tools at its disposal to suppress the global terrorist threat in Afghanistan” and guarantee that basic human rights will be respected.

“We are receiving chilling reports of severe restrictions on human rights throughout the country. I am particularly concerned by accounts of mounting human rights violations against the women and girls of Afghanistan,” he told the 15-member council.

Back in Ontario, the Brampton family is trying to raise funds for donations that will go towards food, transportation and hopefully a plane ticket to bring their loved ones to Canada.

A GoFundMe page created by the daughter on Sunday has so far raised $390.

“Honestly, there’s not much we can do here,” she said. “We want to raise money for them now.”

— with files from Global News’ Eric Sorenson and Reuters