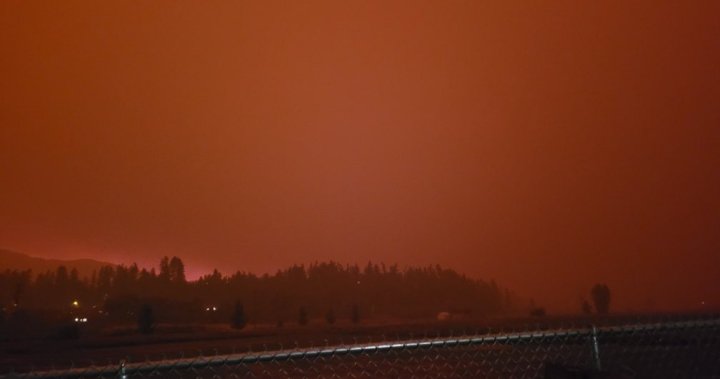 Some residents in Spallumcheen were evacuated Sunday evening as the White Rock Lake fire continued to behave aggressively.

Properties in the southern part of the township west of Highway 97A were told that they have until 10 p.m. to leave.

Meanwhile, the City of Armstrong issued an evacuation alert for residents, calling it a precautionary measure due to the rapidly changing conditions of the White Rock Lake Wildfire.

#Armstrong has issued an evacuation alert. Here’s a look at how the sky changed from 3 pm to 5 pm today. Photo credit: Megan McColl #WhiteRockLakeFire #BCWildfire pic.twitter.com/2WBkBIb8Zy

At 6 p.m. on Sunday, the city estimated the fire was approximately 20 kilometres from the city.

BC Wildfire Service said the fire is behaving aggressively north of Naswhito Creek, where the fire has spotted 2.5 kilometres across Six Mile Creek.

It also noted that a five-hectare fire has been detected northeast of Six Mile Creek.

Fire officials said air resources have been grounded on the southern flank because of active and aggressive fire behaviour.

2:13
Armstrong residents react to travellers being asked to leave

Armstrong residents react to travellers being asked to leave