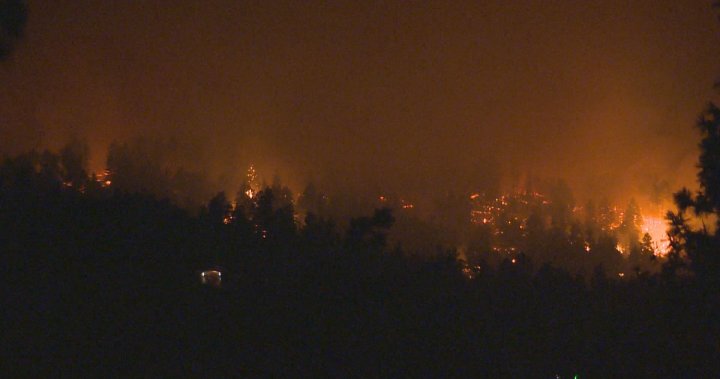 According to the Central Okanagan Emergency Operations Centre (EOC), there are early reports that indicate limited structural damage at the Mount Law fire.

The EOC has not elaborated saying in a news release Monday morning that due to evolving conditions, crews have not been able to complete a full assessment of structure damage.

More information will be provided to property owners and the media as it becomes available, the EOC said in its news release.

According to the B.C. Wildfire Service, the Mount Law wildfire grew overnight to 800 hectares.

ORIGINAL:  Hundreds of people remain out of their homes due to the Mount Law wildfire burning about two kilometres southwest of the Glenrosa neighbourhood in West Kelowna.

According to Central Okanagan Emergency Operations early Monday morning, the fire remained active overnight and likely grew, although there is no updated size estimate at this point.

Read more:
Entire city of Merritt, B.C., on evacuation alert due to wildfire

The Emergency Operations Centre said it expects a dynamic day on the fire front.

It’s not known if any structures were lost to the flames overnight but the centre is expected to provide an update later in the morning.

On Sunday night, 460 properties, namely in the upper westerly parts of Glenrosa, have been placed on an evacuation order, while the remainder of the entire Glenrosa area is on an alert.

Just after midnight, additional alerts for 60 properties, including some within Peachland and the Regional District of the Central Okanagan were also issued.

Read more:
Entire city of Merritt, B.C., on evacuation alert due to wildfire

The Emergency Support Services reception centre for evacuated residents due to the Mount Law wildfire is in the gymnasium at Mount Boucherie Secondary at 2751 Cameron Road in West Kelowna.

There is also a reception centre at the Salvation Army church at 1480 Sutherland Avenue in Kelowna.

The B.C. Wildfire Service believes the fire was human-caused.

Officials at the EOC are urging people to stay clear of the area to avoid disrupting the fire fight as well as staying off the water so firefighting aircraft can easily pick up water to douse the flames.

2:34
Crews battle to save Logan Lake

Crews battle to save Logan Lake