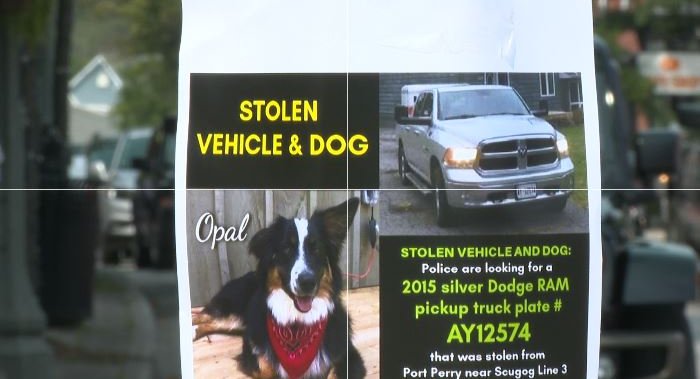 A couple from Cobourg is devastated after their truck was stolen, with their nine-month-old puppy inside.

It’s been two days since Gavin Bergsma’s truck, a silver 2015 Dodge Ram, was taken in Port Perry, leaving them searching for the little dog.

“I’m just devastated that somebody could do that to our dog,” says his wife, Claudia Woodruff.

“She’s the love of our lives, and we just want her to be home.”

On Wednesday around 10 a.m., Bergsma stopped along the side of the road to check a well for his work. He had left the car running for his furry friend, as the temperature was more than 30 C that day.

But when he came back, his dog, Opal, and the truck were nowhere to be seen.

“I do environmental monitoring and I just parked on the side of the road to quickly hop out of the truck to a well,” said Bergsma.

Bergsma says he usually brings the dog with him for his tours.

“I was out working, and she comes with me sometimes, loves playing in the creek and fields sometimes,” he says.

“I was kind of in the tall grass, bent over at a well. And I didn’t see the truck, but just thought it was out of view. But then realized it was gone.”

The Cobourg couple says all that was left — was a bike in its place. This happened near Port Perry, along Simcoe Street, near Scugog line 3.

“They had my truck with pretty much a full tank of gas. So they could have gone to Oshawa, anywhere in York region or Durham region,” he says.

Now desperate to find their puppy, an Australian Shepherd, they started searching all of those areas. On Friday, the couple searched in Bowmanville, putting up flyers and speaking with local business owners to see if they could get help.

“We’ve been through Kawartha Lakes, around Durham and Peterborough,” he says.

It’s a far jaunt from where the truck was stolen, too. But Insp. Ryan Connolly with the Durham Regional Police Service says a lead shows them the alleged thief is making the rounds.

“We did have a pretty good investigative lead that involved a potential suspect sighting in the town of Gooderham, Ont.,” says Connolly.

That’s in Haliburton County, an area north of Peterborough and more than 130 km from where Bergsma lost his truck. But with the truck having a full tank of gas, police are now widening their search area, asking anyone for tips.

Team Chelsea, a lost animal search group, is also helping out, and the couple’s story has been shared thousands of times on their site as well.

The couple says it’s heartwarming to see everyone come to their aid in their time of need.

“Everyone has been so helpful to share and reach out to support us,” says Bergsma.

The couple just got married in May and got the dog earlier this year. They say she’s part of their family and just want her back.

“We don’t care about the truck. If they can just drop off the dog anywhere so we can have her home,” says Woodruff.

The truck is a 2015 silver Dodge Ram with the license plate AY12574. The dog, an Australian Shepherd, is described as mostly black with white on her paws and belly.

If you have seen the truck or the dog and could help, contact Durham Regional Police.