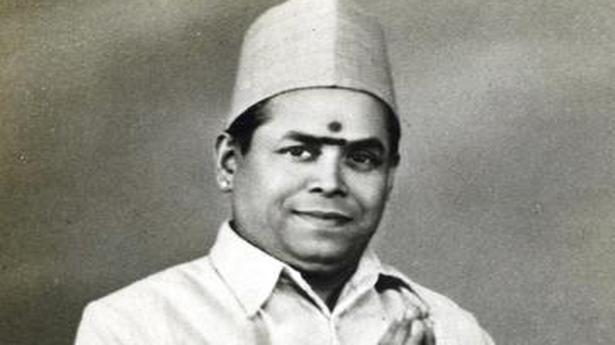 The popularity of Tamil theatre as a medium of mass entertainment and communication made it an able ally in the freedom movement. Several events in the struggle for independence such as the Jallianwala Bagh massacre, the Nagpur flag satyagraha and the hanging of Bhagat Singh were represented in Tamil theatre as songs and incidents interwoven into the scripts.

People thronged to the plays, and some sequences were so popular that the plays were advertised with specific references to them. Artistes such as S.S. Viswanatha Dass even wore khadi costume onstage.

Mahatma Gandhi’s ideals and spirit ignited the fire of nationalism among several theatre artistes. One such artiste was Nawab Rajamanickam Pillai.

Born in 1906 in Thanjavur, Rajamanickam Pillai took to theatre at an early age. After initially training in the troupe run by K.T. Nataraja Pillai, a renowned stage-harmonium player of those times, he joined the Boys Company run by Jagannatha Iyer, the Bala Meena Ranjani Sangeetha Sabha, around 1914 and came under the tutelage of Sankaradas Swamigal.

Among Pillai’s colleagues were several actors who would go on to become well-known names in the world of cinema such as M.R. Radha, K. Sarangapani and S.V. Venkatraman.

In 1933-34, Rajamanickam Pillai along with a few others started the Madurai Devi Bala Vinoda Sangeetha Sabha, running it successfully for more than three decades. Early on in the troupe’s journey, it had a celebrity visitor in Mahatma Gandhi, who, on an invitation from Rajamanickam Pillai, watched a performance of Nandanar in Coimbatore. The event is well documented.

“I wish that this Sabha’s activities will prove beneficial to the nation,” wrote Gandhi in the visitors’ book, signing his name in Tamil. A touched Rajamanickam Pillai considered this a great blessing. He ordered charkas for the entire troupe from Tirupur and taught them to spin cloth, using it for their uniforms. The name of the troupe was embroidered on them and inside, an emblem of the tricolour flag of the Indian National Congress.

In 1939, Rajamanickam Pillai staged Inbasagaran, a play by writer and freedom fighter C.A. Ayyamuthu (‘Kovai’ Ayyamuthu), where a scene showing the protagonist spinning the charka was included. The climax had a lengthy dialogue where the hero touched on themes such as the spirit of cooperation, upliftment of the poor, promotion of education, and development of employment opportunities for the youth.

Rajamanickam Pillai was an ardent Gandhian in thought and action, who believed that yoga was essential for both physical fitness and mental wellbeing. His troupe’s daily routine began with a yoga session and, in the prayer sessions, the troupe paid obeisance to national leaders as well, whose portraits adorned the puja room along with those of deities. Such was his devotion to the Mahatma that Rajamanickam Pillai named his daughter, born after the leader’s assassination in 1948, Chandragandhi.

In the days leading to August 15, 1947, the troupe was performing at Balakrishna Theatre in Tuticorin. Rajamanickam Pillai decided to commemorate the momentous occasion.

On the night of August 14, as the troupe performed the play Dasavatharam, a few minutes before midnight, a backdrop depicting the map of the country was unfurled in the middle of the play. A lady stood in front of it on a lotus, dishevelled and in chains. “Ten boys, five on each side, flanked her, wearing face masks representing various national leaders. When the clock struck 12, crackers went off and the chains binding her snapped, and in her hands appeared the national flag, charka and a trishul, denoting the birth of a free country,” recalls Manickam, one of the veteran stagehands, who then as a five-year-old boywas part of the troupe.

It was an electrifying moment, with a conch and nagaswarams adding to the emotional build-up. The scene was a huge success. That it had no relation to the play was of little consequence, and Rajamanickam Pillai, on popular demand, enacted it in subsequent shows for more than a week. A hugely delighted audience awarded him the title ‘Sudhandhira Nataka Mani’.

The writer, a heritage buff and amateur Tamil theatre artiste, thanks Rajamanickam Pillai’s family for their inputs.