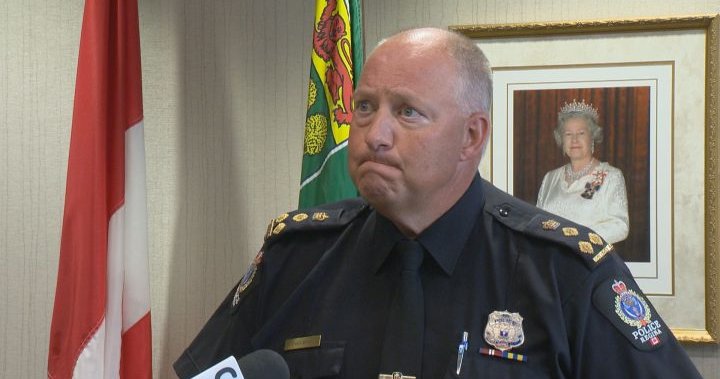 Regina Police Service (RPS) Chief Evan Bray said he’s open to considering all recommendations made by the jury at the inquest into the 2019 police-involved death of Geoffrey Morris.

“I’m very accepting and open to the recommendations they gave us,” Bray said during a Thursday morning press conference.

“Some of them, I think I can safely say, we already do. Some of them we will be able to implement in fairly short order and there’s a couple that I think will take a little bit more dialogue, and that’s really around the body-worn cameras.”

Following a three-day inquest, a jury determined that 41-year-old Geoffrey Morris died on May 4, 2019, from a gunshot wound to the head.

They ruled the manner of death to be suicide (by police shooting).

Coroner’s regulations dictate that manner of death must be listed as either natural, accident, suicide, homicide or undetermined.

Among the recommendations was a request for “all non-commissioned officers have bodycams when called to a scene as a supervisor” and to “have crisis teams wear bodycams”.

Bray said the cameras are an idea he thinks warrants exploration.

“I think of all the recommendations that’s the one I’m willing to explore but it’s going to involve conversations with the Board of Police Commissioners,” Bray said, adding that commissioners reviewed an RPS report on body cameras in a private board meeting in March.

“Knowing that body cameras were mentioned in two of these recommendations, I think that just adds to the conversation.”

Bray said, though, that the decision to adopt body cameras will ultimately rest with the Board of Police Commissioners.

“I don’t think I’m in a position to commit to it. I will commit to further conversations,” he said.

Police Commissioner and Ward 3 City Councillor Andrew Stevens said he has requested that in-private report be forwarded to a public board meeting later this year, but that after reviewing the report he isn’t sold on the idea.

Read more:
Police body cameras in Canada: How common are they and do they reduce excessive force?

“[The report] did provide a really comprehensive, research-based overview of body-worn cameras with no specific recommendations. It canvassed findings from police services in Canada, looked at available research conducted by independent researchers, and I did ask for it to come to public session because it is an issue that merits public attention and discussion,” Stevens said.

“My own reading of the available information is that there is no conclusive evidence to suggest that body-worn cameras necessarily accomplish all the sorts of accountability goals the public may be looking for.”

He said that because the report was viewed in private, he couldn’t reveal exactly how much outfitting RPS officers would cost but said expenses would likely run above seven figures when device and data purchase, storage and maintenance is factored in.

“If we’re looking at different ways of improving accountability, investing in community wellness and public safety, for me I really have to question if that’s a seven-figure amount that’s rightfully spent,” he said.

“And the fact that it might not get to the root causes and issues that many accountability experts and advocates are looking for suggests that there’s reason to give it some critical thought and that this might not be the best path to go down.”

Read more:
New, expanded Board of Police Commissioners to oversee Regina policing in 2021

Another of the jury’s recommendations requested that the RPS “have an emergency list of elders willing to attend, in person or via digital communications.”

He said he meets with the council quarterly, and plans to next meet with the elders in the fall.