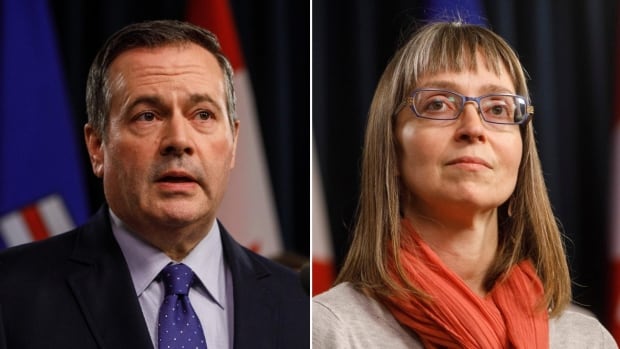 Alberta is rowing back on plans to end mandatory isolation for those who test positive for COVID-19, a government source told CBC News, as cases in the province hit their highest level since late May.

The province was due to end most COVID-19 restrictions on Aug. 16, including requirements to wear masks on public transit and in schools as well as strict protocols around testing and contact tracing.  But the province’s current health guidelines will remain in place for now, the source said.

Plans to move COVID-19 testing from provincial assessment centres to physicians’ clinics as of Aug. 31 are still on track, the source said.

Alberta public health officials reported 550 net new cases of COVID-19 on Thursday, the second day in a row that the daily case count surpassed the 500 mark.

Dr. Deena Hinshaw, Alberta’s chief medical officer of health, is expected to announce the latest changes to plans during a news conference on Friday, according to the source.

The province in July announced the plan to scrap restrictions but quickly faced a backlash, with the Canadian Paediatric Society, Alberta Medical Association, Alberta College of Family Physicians and the federal health minister all expressing concern.

In a column sent to news outlets in early August, Hinshaw apologized for causing “confusion, fear or anger” after communicating the plan to lift public health measures.

Federal Health Minister Patty Hajdu last week wrote to her Alberta counterpart, saying she agreed with the Canadian Paediatric Society’s description of Alberta’s move to lift the measures as an “unnecessary and risky gamble.”

Alberta Premier Jason Kenney fired back at the minister, saying he wouldn’t “take lectures” from the federal government.

The number of Albertans who have died from COVID-19 stands at 2,331.