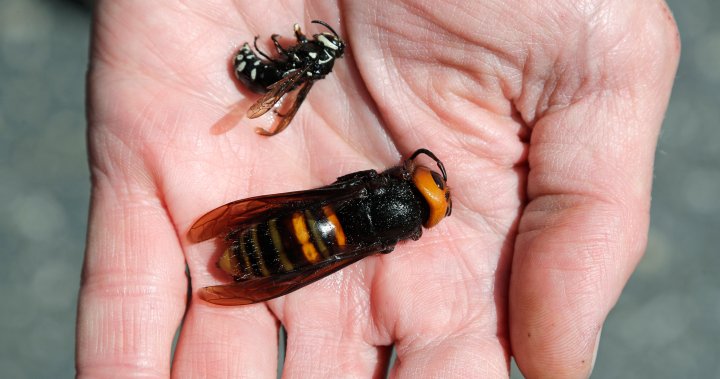 The first live “murder hornet” of 2021 has been spotted approximately one kilometre from the Canada-U.S. border, confirmed scientists from the Washington State Department of Agriculture (WSDA).

In a news release Thursday, entomologists said the Asian giant hornet was reported by a Whatcom County resident in Washington state on Wednesday.

The frighteningly large hornets measure up to five centimetres long, pack a sting like a red-hot thumbtack, and can slaughter a whole colony of honeybees in a day. The hornets threaten to devastate the already-fragile bee population in North America, which would result in wide-ranging damage to farms and ecosystems.

An image showing the hornet attacking a paper wasp nest was included with the report; the sighting was a mere three kilometres from where WSDA destroyed the first Asian giant hornet nest in the U.S. last year.

“This hornet is exhibiting the same behaviour we saw last year — attacking paper wasp nests,” Sven Spichiger, WSDA managing entomologist said. “If you have paper wasp nests on your property and live in the area, keep an eye on them and report any Asian giant hornets you see. Note the direction they fly off to as well.”

The organization said both U.S. and British Columbia officials will be setting up traps in the area to catch a live hornet, tag it and track it back to its nest.

The hornets are native to eastern Asia, but they were first spotted in North America in 2019, when a few of the massive, yellow-headed creatures were reported near Nanaimo, B.C. The first known nest in Canada was wiped out on Vancouver Island in the fall of 2019.

Each hornet has a big yellow head, two huge black eyes, a black body and a black-and-yellow striped abdomen. They can grow to be the size of a AA battery and have hardened shells that allow them to bull through a honeybee colony while shrugging off its defences.

The five-centimetre-long invasive insects are the world’s biggest hornets and prey on honeybees and other hornets.

A handful of hornets can raid a honey beehive, decapitate thousands of its workers and snatch all of its young within a matter of hours.

Asian bees — unlike bees in North America — have learned to defend themselves by swarming over the hornets and vibrating their little bodies, which generates enough heat to effectively cook the much larger insects to death.

While they are not particularly aggressive toward humans, in rare cases a person stung repeatedly by murder hornets could die.

— With files from The Canadian Press and Global News’ Josh Elliott