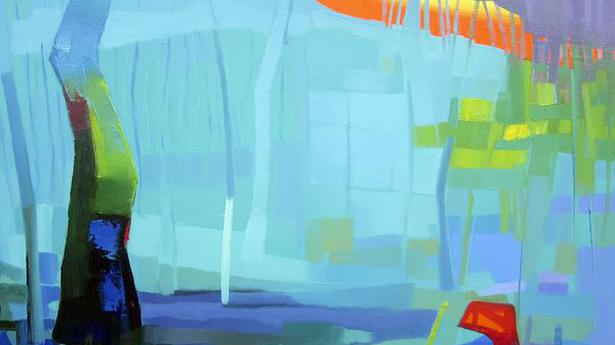 Inspired by petrichor, the upcoming exhibition at MKF Museum of Art, Bengaluru, is a riot of colours and expression

Despite its rather insipid name, nothing revitalises the soul as petrichor — the smell of rain on dry, parched land. For artist Ganesh Doddamani, the invigorating scent jolted him out of the ‘artist’s block’ he was stuck in and inspired him to start painting again.

“I started working in 2000 after my Masters from Shantiniketan in West Bengal. I was captivated with the Buddha and most of my works were busts of the Buddha in pretty, pastel shades that exuded a sense of calm,” says Ganesh, who was working in Bengaluru at the time.

“After a while, I realised that my work did not reflect the teachings and thoughts of Buddha. I was unable to express my thoughts or feelings and in an attempt to break that impasse, I experimented with colours and medium, working on landscapes, abstracts and other art forms, to no avail,”

“In 2015, I returned to my hometown of Belgaum, in the hopes that the picturesque landscape of the ghats would reinvigorate my creativity. And then it rained, the first rain that summer. The smell hit me and it was almost like an out-of-body experience. I was filled with indescribable joy and I wanted to paint the smell of happiness. I began painting soon after, following a break of almost two to three years.

“Until then I hadn’t worked with such a riotous palette of colours. Family and friends who didn’t even know what had inspired me or what I was trying to convey said my canvases uplifted their spirits,” says the 45-year-old artist.

Ganesh says the 25 canvases that comprise ‘Sense of the Land’ were created over three-and-a-half years and have since been exhibited all over India, as well as in Nepal, Switzerland and other European countries.

Despite doing very well as a Commerce student, Ganesh always knew he wanted to do something in the art line. He believes his discussions with artists KB Kulkarni and Chandrakant Kusnoor moulded his early days as an artist.

Then, there was Shambhu Das, his teacher at Shantiniketan whom he credits for helping him find his form. Ironically, it was failing in Calligraphy that led him to meet Shambhu. And unlike most teachers, Shambhu asked for ‘Gurudakshina’ even before classes began.

“I thought he would ask for a small sum as fees. Instead, he asked me to present him with 500 watercolour canvases! I could only create three a day and soon realised I would never meet that number in my gap year. When I told him I would be unable to do so, Shambhu told me he valued quantity over quality.”

Like most people who have been taught quality trumps quantity, Ganesh couldn’t wrap his head around his teacher’s emphasis on numbers. “He told me, ‘Unless you keep creating and continually experimenting, you will never learn.’ That was a lesson I’ve never forgotten and it has been my guiding force all along.”

With his paintings ranging from ₹ 10,000 to ₹ 1,60,000, Ganesh says 50% of the proceeds from the sale of these canvases will go to artists who have been adversely affected due to the pandemic.

‘A Sense of the Land’. a collection of acrylics and oils by Ganesh Doddamani will be on display at MKF Museum of Art, Lavelle Road, Bengaluru from Aug 13 to 29. For details contact 9019276294.