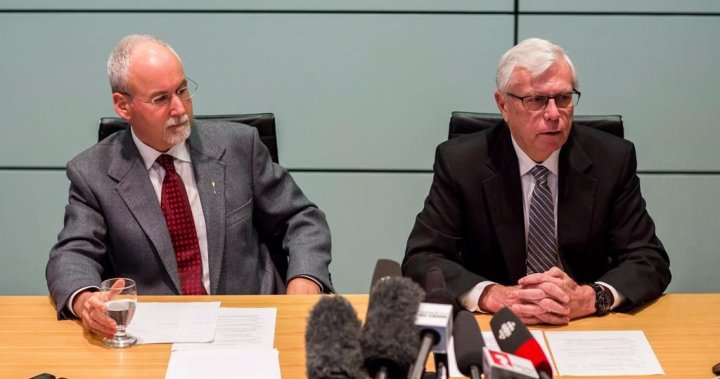 The British Columbia Prosecution Service says two special prosecutors have declined further charges after receiving the final RCMP report into the spending activities of senior staff at the provincial legislature.

The service says in a statement released Tuesday that the prosecutors concluded the assessment standard was not met for any charges beyond those that have already been laid against former legislature clerk Craig James.

It means former sergeant-at-arms Gary Lenz, who was suspended with James in November 2018, won’t face charges.

In a court last month, James pleaded not guilty to five charges, including breach of trust and fraud, while the judge tossed out one of the accusations against him.

Lenz, who denied any wrongdoing, was then placed on administrative leave by a unanimous vote of the legislature.

The Mounties began investigating staff at the legislature in 2018, and former Speaker Darryl Plecas produced a report after that outlined allegations of misspending at the legislative assembly.

Beverley McLachlin, the former chief justice of the Supreme Court of Canada, was appointed after the Plecas report was released to look into the allegations against them.

In her report, she said James improperly claimed benefits and used legislature property for personal reasons, but that Lenz did not engage in misconduct.

The report also said there was a lack of clarity in authority over expenses and administrative matters at the legislature that were the core of her investigation.

The prosecution service said in a statement in July that James has elected trial by judge alone, which is expected to start in January.

Lenz issued a statement Tuesday saying he is pleased with the special prosecutors’ decision.

He thanked the police, prosecutors, and friends and family who stood by him.

“I have always maintained my innocence and now it is clear for everyone to see,” the statement says.

“I look forward to putting this ordeal behind me and enjoying my retirement with my loved ones.”