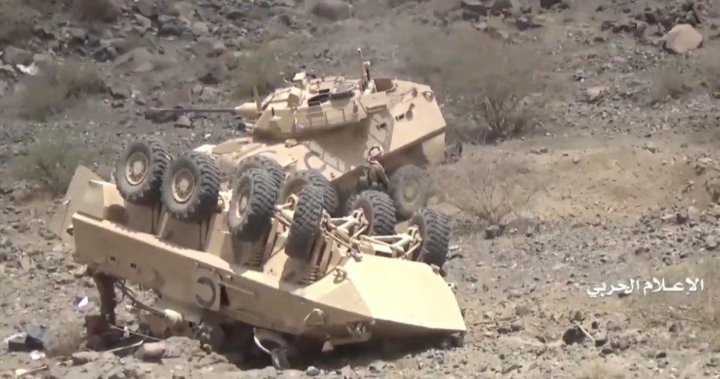 The Trudeau government is facing renewed calls to end arms exports to Saudi Arabia following a new report that alleges there is “persuasive evidence” that Canadian-made weapons are being used in the war in Yemen, which has killed at least 233,000 people.

The new report from the disarmament group Project Ploughshares and Amnesty International offers a scathing rebuttal to a review from Global Affairs Canada last year that found there was “no credible evidence” that Canadian weapons and military equipment were contributing to Saudi Arabian human-rights violations.

Canada’s $15-billion agreement to export light armoured vehicles (LAVs) to the Kingdom – produced by General Dynamics Land Systems Canada in London, Ont. – has been a political controversy for the Liberal government as Saudi Arabia ranks among the world’s worst on human rights.

The report released Wednesday titled “No Credible Evidence” details the ongoing saga since the deal was first approved by the former Conservative government in 2014 and given the final, crucial green light by Trudeau’s Liberals in 2015.

Using government records, media reports and summaries of investigations by human rights monitors around the world, it purports to show that “there is persuasive evidence that weapons exported from Canada to (the Kingdom of Saudi Arabia), including (light armored vehicles) and sniper rifles, have been diverted for use in the war in Yemen.”

“Given the overriding risk posed by Canadian weapons exports to (Saudi Arabia), Canada must immediately revoke existing arms export permits to KSA and suspend the issuance of new ones,” the report said.

It also details photographic evidence from the last few years that appears to show Canadian-made LAVs, fitted with machine guns and cannons, and PGW Defence Technologies sniper rifles in Yemen amid clashes between coalition forces led by Saudi Arabia and Houthi rebels backed by Iran.

According to the UN Office for the Co-ordination of Humanitarian Affairs, the Yemen conflict has resulted in an estimated 233,000 deaths, including 131,000 from indirect causes like a lack of food, medical services and infrastructure. The UN has called the war the “world’s worst humanitarian crisis.”

This also follows images from 2015, reviewed by Armament Research Services, an international intelligence consultancy that traces arms, that show what appears to be a Canadian-made sniper rifle in the hands of Houthi fighters.

“We’ve seen a bunch of open-source photos and video evidence over the years of these rifles,” said Kelsey Gallagher, a researcher with Project Ploughshares and co-author of the report. “This is a scenario Canadian officials have to address. They have to find a way to mitigate the ongoing diversion of weapons, up to and including the cessation of export permits.”

Between 2016 and 2019, Canada exported nearly 5,000 rifles to Saudi Arabia, with the majority being sniper rifles manufactured by PGW Defence Technologies Inc. in Winnipeg, Man., according to the report.

PGW Defence Technologies did not respond to questions from Global News, while General Dynamics Land Systems Canada declined to comment.

Gallagher said the government is using an intentionally narrow focus when evaluating the risk of whether Canadian-made weapons could be used or diverted to the war in Yemen.

The report alleges Canada is breaking its obligations under domestic law and the global Arms Trade Treaty (ATT) by using a “flawed risk assessment” to determine whether Canadian weapons could be misused to commit or facilitate human rights abuses. According to Canadian law, Ottawa is required to deny export permits “if there is a substantial risk that the export would result in a serious violation of human rights.”

Last year, Global Affairs Canada said that in order for a “substantial risk” to occur there needs to be a “direct, present and foreseeable risk” that the military export (a weapon or technology) will result in a negative consequence like violating international human rights law or contributing serious acts of violence against women and children.

“There is no substantial risk that current Canadian exports of military goods and technology to (Saudi Arabia), would be used by (Saudi Arabia) to commit or facilitate serious violations of (international humanitarian human rights law), including ‘internal repression,’” the department said in an April 2020 report.

The report did note the Kingdom’s “overall human rights record remains troubling” and “continues to perpetrate grave human rights violations. These include arbitrary and unlawful killings, torture and other cruel and inhumane treatment”

Gallagher pointed to conflicting assessments in the Global Affairs report that concluded that, while there is a “substantial risk” that Canadian exports of certain types of military weapons like air-to-surface missiles or bomber aircraft) would be used to commit human rights abuses in Yemen, other military items – including LAVs – posed no risk. He also noted that Ottawa’s own intelligence assessments have suggested that the Saudi army has used older Canadian-made LAVs in cross-border operations into Yemen.

“This kind of focus on evidence completely misses the mark on Canada’s obligations under the Arms Trade Treaty,” Gallagher said. “(Canada) must revoke arms exports if there is a substantial risk that a recipient of Canada’s weapons will use those weapons to, broadly speaking, bust human rights.”

Canada was named publicly for the first time last September by a UN group monitoring the war in Yemen among a list of countries selling arms and fuelling the ongoing fighting.

2:35
Humanitarian crisis in Yemen worsens amid civil war and COVID-19

Gallagher said Canada should adopt an “overriding risk” formulation – required under the ATT, which Canada became a party to in 2019 – which is far more restrictive on arms exports.

He said the Canadian government’s assessment omits whether Canadian-made weapons could be used to facilitate humanitarian abuses and fails to evaluate the risk of Saudi Arabia diverting weapons to Saudi-led coalition forces in Yemen.

The report calls for an end to arms exports to the kingdom and the creation of an arm’s-length advisory panel of experts to review Canada’s arms export approval process, something promised by former foreign affairs minister François-Philippe Champagne last year.

The organizations are also calling for Canada to update its legislation to stop weapons from being exported that could be used in attacks against civilians and create a definition “substantial risk” that is consistent with its international obligations.

A spokesperson for Global Affairs said in a statement that “Canada has one of the strongest export controls systems in the world” and “human rights considerations are now at the centre of our exports regime.”

In 2018, the Trudeau government announced a review of Canada’s existing arms sales to Saudi Arabia following reports the Saudi government had orchestrated the killing of journalist Jamal Khashoggi. In April 2020, Ottawa lifted the suspension on new export permits to Saudi Arabia and announced that permits are being reviewed on a case-by-case basis.

“These permits are not issued automatically and each of them are carefully scrutinized,” said GAC spokesperson Jason Kung in an email. “Any permit application where there is a substantial risk of human rights violations will be denied.”

Global Affairs did not respond to questions for an update on its pledge to create an advisory group of experts to review the approval process for Canadian military exports.

For years, Saudi Arabia has been the leading destination for Canadian-made military exports after the United States.

According to the 2020 Report on Exports of Military Goods from Canada, Saudi received approximately $1.311 billion in Canadian military exports, which accounted for roughly 67 per cent of the total value of non-U.S. military exports.

Included in the sales was nearly $74 million worth of explosives to Saudi Arabia from a Canadian or Canadian company that was issued a brokering permit, with the arms originating in France.

The sale of the explosives was first reported by the Globe and Mail.

While the government reveals few details about the transactions, including the identities of the people or companies involved, it does say that the explosives belong to a control list, which includes “bombs, torpedoes, rockets, missiles, other explosive devices and charges and related equipment and accessories.”