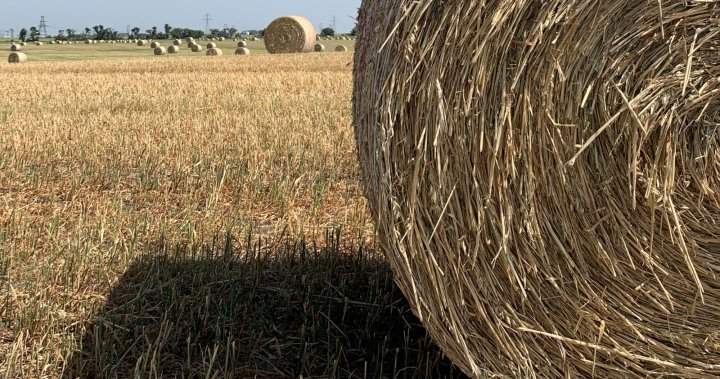 In his 19 years of service, Ponteix RCMP detachment commander Sgt. James Malone said he’s seen agricultural theft before but nothing like this year.

“It’s definitely isolated. This is an isolated topic where there are people preying on it because they know this is happening. This isn’t typical,” Malone said.

“People are ultimately going and stealing other people’s hay. Is it local area, local people? We don’t know.

In one instance, police received a report on July 30 about the theft of 12 hay bales, with a 66-inch diameter, at a rural agricultural location south of Hazenmore, Sask. The farmer said the value of the stolen product is estimated at $2,400.

“Right now, it’s just little bits here and there. We haven’t had any major cases where it’s hundreds of bales … But we’re expecting to see a rise in that,” Malone said.

“We’re doing more rural policing … and making sure we’re out there so people see us.

“Because we don’t have the produce this year and everybody’s been hit hard and everybody has to feed their animals and so forth. We anticipate we’re going to get a few more thefts. We’ve had two in the area so far.”

Agricultural Producers Association of Saskatchewan president Todd Lewis said on Monday that farmers and ranchers are already dealing with an increased price of hay this year.

“We’re seeing immediate effects already. Producers usually have hay reserves on hand in a dry year like this so they can get through the following winter. A lot of those hay reserves are being used right now because it’s so dry.

“Many cattle aren’t out to pasture just because there’s no grass growing at all. The pastures dried right up and there’s very little feed value out there. So it is a difficult time for producers.”

And it’s not just theft, according to RCMP, several producers in the province have been the victim of fraud while attempting to purchase hay. Investigators said fraudulent ads have been placed on social media and other buy/sell platforms by scammers that did not have hay.

“The scams … unfortunately, they take advantage of some of the people that are looking for hay bales … to feed their animals so they’re desperate,” Malone said.

“It’s one of those, ‘I’ll come pick it up on the weekend’ (scams) and they’re asking for half the money down … and, unfortunately, people are paying this money before they actually pick it up.

As of Monday, Malone said no arrests or charges have been laid this year in any of the hay crimes.

RCMP sent out a reminder for people to take steps to ensure transactions online are conducted in a safe manner.

“It basically comes down to buyer beware, be cautious and pay when you see it. Go there, when you see the product, then pay for it. But don’t be putting deposits down. Social media is just a crazy thing where you can get frauded quite easily,” Malone said.

Sask Ag said the Farmers Stress Line is available 24-hours a day for any needed support at 1-800-677-4442. The service is run by Mobile Crisis Services Regina and all calls are confidential.