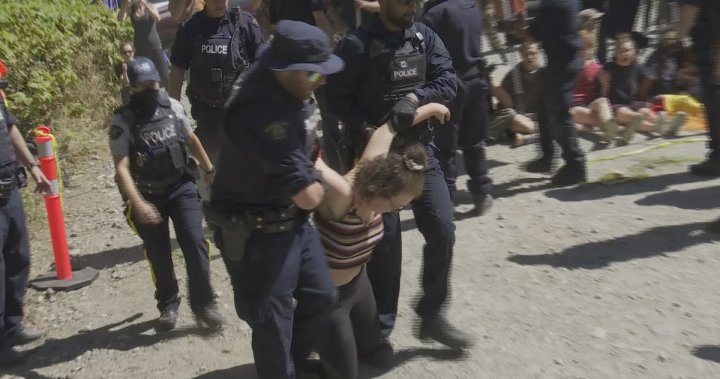 Demonstrators on Monday marked the one-year anniversary of the start of the Fairy Creek blockade with a march on the B.C. legislature while police carried out a major raid on protest camps.

Throughout the day, dozens of police officers carried out what protesters claim is the most significant enforcement action yet, targeting protest encampments near the Fairy Creek watershed.

There’s no word at this point of how many people were arrested.

In the afternoon, several hundred people marched on the B.C. legislature to demand an immediate halt to old-growth logging in the Fairy Creek area, saying it’s critical to protect one of the few remaining intact watersheds on southern Vancouver Island.

“No more clear-cutting because there is no Plan B.”

Opponents of old-growth logging presented a petition of more than 100,000 signatures to Green Party Leader Sonia Furstenau, who promised to present it to the legislature this fall.

“We absolutely agree that there is an incredible urgency to stop logging old-growth in this province,” she said.

A spokesperson for B.C.’s minister of forests told Global News the NDP government has already deferred old-growth logging in 11 areas, including Ferry Creek itself, and that they’re working on a long-term strategy.

Conservationists say government efforts are too little and too late.

“Unfortunately, the most at-risk old-growth forests in B.C. are still open to logging, still unprotected,” Tegan Hansen with Stand.earth said.

“This is a direct contradiction to the promise that this government made to be elected.”

Since the protest blockade went up last year, RCMP have arrested more than 500 people for violating a B.C. Supreme Court injunction.