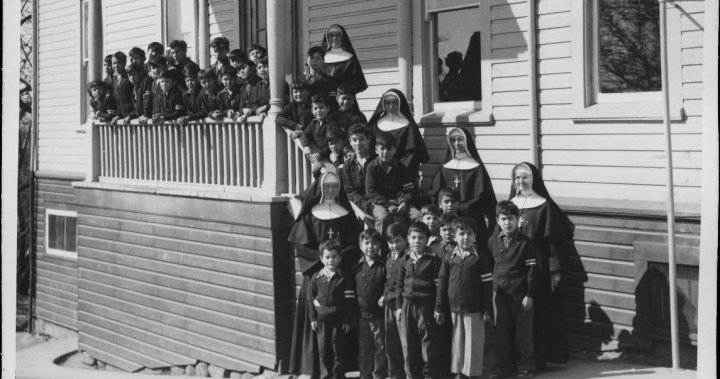 WARNING: Some readers may find details in this story disturbing. Discretion is advised.

An announcement about a former residential school in North Vancouver is expected Tuesday morning.

The Musqueam, Squamish and Tsleil-Waututh Nations will be making an announcement at 10 a.m. PT about the St. Paul’s Indian Residential School.

The exact details have not been released at this time but this story will be updated following the press conference.

2:24
Residential school survivor speaks out after discovery of more graves

Squamish Nation set to make an announcement surrounding the former St. Paul’s Indian Residential School in North Van. Details haven’t been released but the Nation says the topic is deeply traumatizing for many members of the community. Announcement set for 10am @GlobalBC @BC1 pic.twitter.com/pnGCMZIf1l

The Government of Canada was responsible for funding the school, which was managed and operated by the Roman Catholic Religious Teaching Order, the Sisters of Child Jesus.

It is not known what grades were taught at the school.

Records kept by the Indian Residential School History and Dialogue Centre at UBC said the school was described as a “death trap” and a “fire trap” by the Indian Commissioner for British Columbia in 1933.

In addition, two pupils were hospitalized with smallpox in 1929. In 1931, the local Indian Agent reported after an inspection that he suspected the children at Squamish were not being fed properly.

In 1935, the school was the site of a chickenpox epidemic and according to these records, it was very overcrowded in the 1950s.

15:27
Survivor of Kamloops B.C. Residential School says she remembers crying out for her parents

Survivor of Kamloops B.C. Residential School says she remembers crying out for her parents – Jul 15, 2021

There have been several announcements recently about human remains found on the grounds of former residential schools across Canada.

In mid-July, it was revealed the Penelakut Tribe found more than 160 undocumented and unmarked graves at the site of the Kuper Island Indian Residental School, located on what is now called Penelakut Island, in the B.C. Southern Gulf Islands.

In May, the remains of what’s believed to be 215 children were found at the site of what was once the Kamloops Residential School in B.C. That was followed in June by unveilings of hundreds of remains in Brandon, Man., Saskatchewan’s Cowessess First Nation and Cranbrook, B.C.

To date, the number of remains reported to be found across the country totals well over 1,000.

The Indian Residential Schools Resolution Health Support Program has a hotline to help residential school survivors and their relatives suffering trauma invoked by the recall of past abuse. The number is 1-866-925-4419.