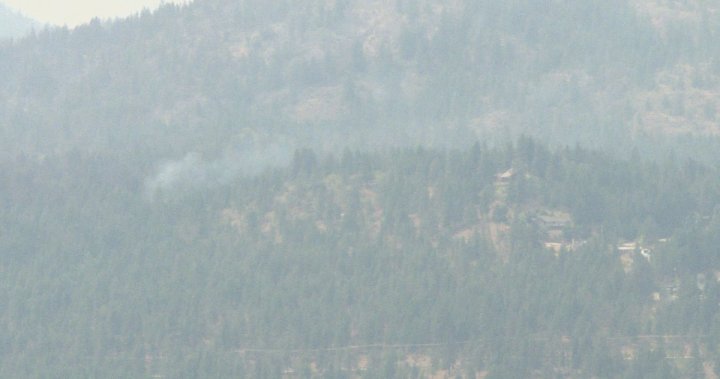 Plumes of smoke were rising off the hillside above the west side of Okanagan Lake on Sunday afternoon.

It was a far cry from the intense flames from the massive 55,600 hectares White Rock Lake Wildfire that were visible on the west side of the lake in the early hours of Saturday morning.

Cooler temperatures and some rain have created a temporary lull in fire activity in the area of the blaze near Okanagan Lake.

Fire information officer Forrest Tower said the BC Wildfire Service is trying to capitalize on the “window of opportunity” to get “as ahead of the curve as we can.”

The relatively calmer fire behaviour on Sunday means it is safe for ground crews to attack it head-on.

“We also have our wildland firefighters working behind and away from the structures to build guard and prevent any further growth where the fire isn’t already threatening any structures,” said Tower.

Tower said the flank of the fire near Okanagan Lake was a surface fire that was not vigorous on Sunday afternoon.

However, the fire has burnt to within 125 meters of Okanagan Lake in places.

Tower said he is not sure how close the flank of the fire near Okanagan Lake has burnt to structures, but the fire perimeter is on private property.

However, the RDCO said it could only vouch for areas of the regional district that receive fire service, as other areas of the RDCO haven’t been assessed.

On Sunday afternoon, conditions had improved enough that the OKIB was able to partially downgrade its evacuation order to an alert.

The downgrade means some residents can return home but should be ready to leave again if conditions change.

Prior to the OKIB evacuation order being partially downgraded, one evacuee said his family had been told to go hours away to Sun Peaks because there were no rooms left in Vernon for evacuees.

The fire service is warning the reprieve in fire conditions in the Okanagan Lake area will only be temporary.

“By probably Thursday and Friday of next week, it has the chance to be as aggressive as it has been,” Tower said.

The wind conditions are expected to play a big role in where growth occurs when the fire roars up again.

“We will just need to get a little closer to that time to see where we can forecast winds and wind direction so we would have a better idea of growth and in what areas,” Tower said.

Tower said on Sunday afternoon there was no longer an immediate concern about the fire spotting over Okanagan Lake to Vernon, but that could change again.

“That’s something to still pay attention to. There is obviously still a very large and very active wildfire, so alerts and orders will be definitely changing for the next few weeks if not a month plus,” Tower said.

A portion of Vernon remains on evacuation alert Sunday evening.