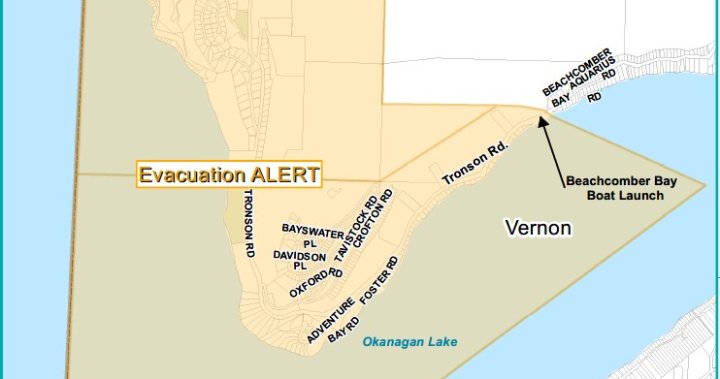 The City of Vernon has rescinded part of its evacuation alert that it issued late Friday night because of the White Rock Lake wildfire.

The alert was issued at 10:43 p.m. on Friday and was in response to the massive fire that’s now encroaching the northwestern shores of Okanagan Lake.

The fire is estimated at 55,000 hectares, but city officials rescinded part of the evacuation alert on Saturday afternoon due to a change in weather conditions that included light rain.

Read more:
‘We’re doing it all on our own’: Monte Lake residents feel abandoned over White Rock Lake fire

However, not all parts of Vernon are in the clear. The city said there are parts that remain under evacuation alert, including:

“The City of Vernon works closely with BC Wildfire Services and seeks advice on evacuation alerts and evacuation orders,” the city said in a press release that was issued at 2:30 p.m.

“With changes to the current weather conditions, the probability of ember debris causing spot fires has been reduced.

“While the weather forecast over the next 48 hours is favourable enough to rescind the alert for properties within the City of Vernon boundaries, the region remains at high risk and the situation is subject to rapid and immediate change.”

The city strongly recommends that “residents maintain heightened awareness, and have evacuation plans in place, including identifying accommodation in advance of an evacuation order.”

In related news, the Regional District of North Okanagan (RDNO) announced on Saturday afternoon that it was rescinding an evacuation alert for portions of Electoral Area B, C and the District of Coldstream.

The alert was implemented due to the White Rock Lake fire.

Properties rescinded from the evacuation alert include:

The RDNO also noted that the evacuation order for properties in Electoral Area B, located on the west side of Okanagan Lake, remains in effect.