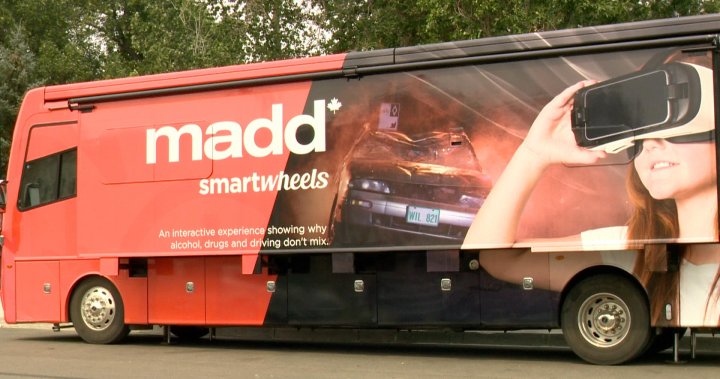 The SmartWheels bus presented by Mothers Against Drunk Driving (MADD) Canada is making its way through Regina, educating residents on the dangers of impaired driving.

The bus was parked outside the legislative building on Saturday to give people a chance to see what impaired driving looks like, with the help of virtual reality (VR).

Those who take part in the experience are able to find out what driving under the influence of alcohol or cannabis looks like.

👀Keep an eye out for the MADD SmartWheels Bus around #yqr this month! @madd_sk

“Some of us haven’t experienced VR at all and those of us who have, sometimes it’s for entertainment purposes but this sends a public safety message in a way that we don’t usually get to experience education programs,” Darren Chetana, SmartWheels program facilitator, said.

“This is a state-of-the-art, educational program that is not seen anywhere else and possibly the future of education and how we deliver this message of impaired driving and how to avoid it.”

Chetana described the VR experience as a first-person perspective on how it feels to drive impaired.

2:27
Trial begins in Brampton crash that killed mother and 3 daughters

The bus is normally used to educate students in between grade 4 and grade 6 about why driving and drugs and alcohol “do not mix.”

“At that age, Grade 4, 5, and 6, they don’t really have an idea – they might not know about drugs and alcohol, but with this program, we get the facts down and lay a good foundation for them on how to approach impaired driving, drugs and alcohol as they get older into their teen years.”

Chetana said since school is out for the summer, MADD is bringing the bus out into the community to give residents a 15-minute demo of what the program is like.

The SmartWheels bus will be in Regina until Friday when it moves on to other locations.

For more information on the program, visit MADD Canada’s website.