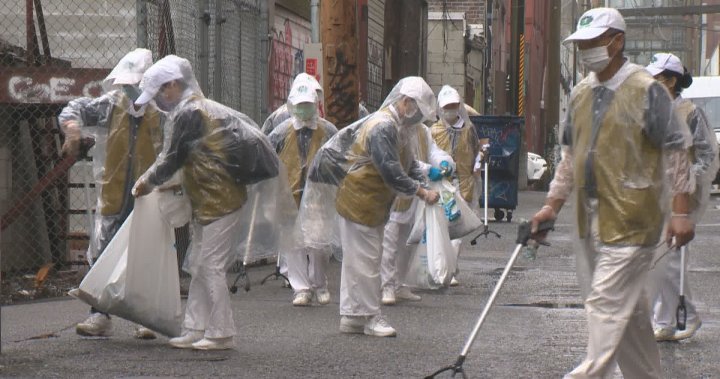 Rain didn’t stop an army of volunteers from coming together in Vancouver’s Chinatown on Saturday to show some love for the historic neighbourhood hit hard by the COVID-19  pandemic.

Clad in waterproof gear and armed with trash pickers, close to 200 volunteers roamed the alleys, streets and sidewalks in the annual Community Cleaning Campaign — eliminating the litter that’s caused the landmark to lose some of its luster of late.

“This is where it all started, this is the heart and soul of the community.”

“I think everybody has a memory of Chinatown and we don’t want to lose that as the city continues to grow,” added City Coun. Sarah Kirby-Yung.

The area’s slow decline began more than a quarter of a century ago, when parking problems and crime started driving customers away.

By early 1996, many Chinese were visiting Richmond’s then-five Asian malls — and Chinatown found it hard to compete.

Tourists and shoppers disappeared amid a spike in anti-Asian attacks and surge of street disorder, and Chinatown was overrun with graffiti, vandalism and garbage.

According to the Vancouver Chinatown BIA, many Chinese mom-and-pop merchants who were facing succession issues and considering calling it quits prior to COVID, closed up shop in 2020.

“We’ve had a lot of shops close down because of the pandemic, loss of tourism and what’s happening on the street,” Eng told Global News.

“Growing up down in Chinatown like, you see how it has changed,” Chinese Community Policing Centre volunteer Louis Li said.

Li, who patrols the streets serving as the eyes and ears for the heritage neighbourhood where he was raised, said it’s important to help bring people’s confidence and sense of safety back.

“I think it would make a big difference in terms of cultural identity and making sure that these businesses do stay alive,” Li told Global News.

Li’s team is among the dozens of volunteers from at least ten different groups across the city who were involved in the annual clean up.

The participants — including merchants, residents and neighbours — are all committed to rejuvenating the community’s culture and status as a tourist destination.

Read more:
‘It could be lost forever’: Community working on economic strategy to save Vancouver’s Chinatown

“Working together moving forward is going to be the key to the success of revitalizing Chinatown as tourists start to return,” said Coun. Pete Fry.

“The goal really is to bring people back into Chinatown,” said Eng.

“Show us some love here and in the long-term, Chinatown’s open for business.”