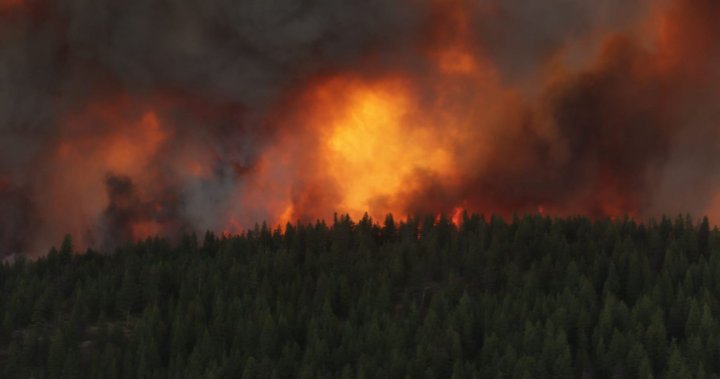 An evacuation order for the White Rock Lake wildfire that’s burning near the northwestern shore of Okanagan Lake has been dramatically expanded.

On Friday night, at 8:41 p.m., Central Okanagan Emergency Operations (CORE) said it was expanding the evacuation order “in light of continued aggressive behavior and unpredictable winds.”

Specifically, CORE said “approximately 975 properties previously on evacuation alert along Westside Road are now under evacuation order and must leave their homes and campsites immediately. The affected area runs south from Ewings Landing to the south end of La Casa Lakeside Resort.”

CORE said this includes properties in:

Earlier Friday, CORE placed 608 properties on evacuation order because of the fire, which stretches across several regional boundaries.

CORE also said non-residents and those visiting in the evacuation area should consider safely returning to their communities, as ESS services are strained by evacuees across the province.

However, CORE noted that if you’re vacationing with a travel trailer and are evacuated, temporary parking is available at Jim Lind Arena/Royal LePage Place, 2760 Cameron Road, in West Kelowna.

4:05
The importance of following evacuation orders

The importance of following evacuation orders

The out-of-control fire, which is estimated at 55,000 hectares — up from 45,000 hectares earlier in the day and from 32,500 hectares on Thursday — is showing Rank 4 and Rank 5 behaviour and is challenging suppression efforts, according to the BC Wildfire Service.

“Structure protection personnel have a roving patrol set up along Westside Road, as well as in the Swan Lake area where personnel are prepared to defend from potential spot fires,” BC Wildfire said earlier Friday.

Hundreds of properties are under evacuation alerts and orders in the Central Okanagan, North Okanagan, Thompson-Nicola and Columbia-Shuswap regional districts.

Further, the Okanagan Indian Band (OKIB) has also issued an expanded evacuation order on Friday night, while the City of Vernon issued an evacuation alert for part of its city on Friday at 4 p.m.

The OKIB said members of the local RCMP, Search and Rescue and other applicable agencies would be expediting the expanded evacuation order.

More about the White Rock Lake wildfire can be found on the BC Wildfire website.