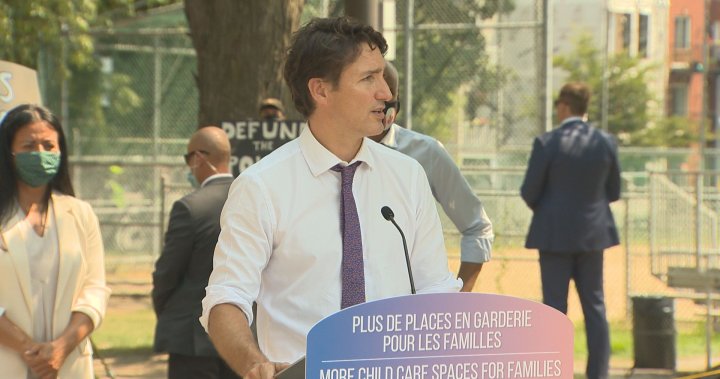 Air Canada and the president of a union representing nearly 10,000 flight attendants say they’re waiting to see the Canadian government’s plan for mandatory vaccinations for COVID-19.

On Tuesday, Prime Minister Justin Trudeau announced he asked the Clerk of the Privy Council to examine whether the government could require workers in federally-regulated sectors, like airlines, to be vaccinated.

Wesley Lesosky, the president of the Air Canada Component of CUPE, said in a statement he’d need to see exactly what the government is proposing and that the union expected to be consulted.

But he also told Global News he hoped everyone who gets on a plane gets their shots.

“I completely appreciate that people should be vaccinated,” he said in an interview, speaking from Vancouver.

“I think passengers should be vaccinated before they get on. It makes the workplace safer for our members.”

He told Global News members were nervous about the Delta variant spreading as flights resume and air traffic volume begins to look similar to how it did before the pandemic.

“Pretty much all airlines are saying we need to increase service, we need to go to more places,” he said, stating flight attendants believe it’s too soon for that to happen.

Since July 22, 46 domestic and 67 international Air Canada flights (not including Air Canada Jazz) had COVID-19 cases, according to information posted by the Canadian Government on Aug. 6.

In a statement to Global News, Air Canada said the health and safety of its customers, crews and employees is always its primary concern and that it opened vaccination hubs in Montreal and Toronto to help get employees vaccinated.

“At this point, it is premature to comment on any policies under consideration by the federal government.”

An epidemiologist at the University of Saskatchewan said planes do have good air filters that help prevent the virus from spreading, though he said any time spent close to other people poses a risk.

“I think (air travel) was relatively safe,” Nazeem Muhajarine said. “The Delta variant has changed the game in terms of the pandemic.”

He stressed fully-vaccinated people can become infected and spread the disease, which poses a danger to anyone who isn’t vaccinated.

“There’s no other situation that we encounter that brings … us people from all continents of the world in one place at one time,” he told Global News.

Muhajarine said the fact that the Delta variant and cases in many regions are now rising again shows that vaccinations aren’t enough, adding people should also wear masks.

While he doesn’t think vaccine mandates are necessary just yet, he said he does support vaccine passports — that people must show documentation proving they have received both shots in order to do things like board flights or go to the movies.

The more the disease spreads, he explained, the more likely it is to mutate again, potentially into a variant that is even more contagious or deadly.

To that end and to stay safe, he said he won’t be getting on a plane anytime in the near future.