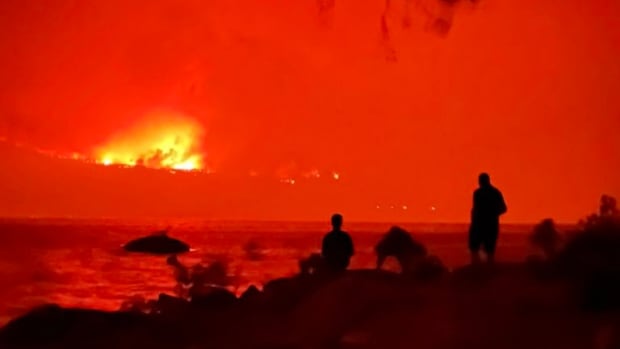 Soot and ash fell on residents in Vernon, B.C., Saturday afternoon as light rain offered some reprieve from growing wildfires in the province’s Interior.

Vernon resident Ross Banner was cleaning soot from the nearby White Rock Lake wildfire off the front window of his home Saturday. His car, parked in front of the house, was covered in ash and pine needles.

“That just happened this afternoon,” Banner said, pointing to his sedan.

Earlier in the day, the City of Vernon rescinded most of an evacuation alert that had been issued for the entire municipality the day before.

Banner said his bags were packed and his car was filled with gas just in case, but he didn’t have a place to stay and wasn’t sure what route he would take because fires were threatening so many nearby areas.

“I’ll just get in the car and leave town, I guess,” Banner said.

Again, near Vernon, black rain falling on us as we take more shots of shockingly dark skies. <a href=”https://t.co/BM9HfW2XfY”>pic.twitter.com/BM9HfW2XfY</a>

Despite the rain in some regions, fire crews are battling an ever-growing number of wildfires throughout B.C.

As of Saturday afternoon, 283 wildfires are burning in B.C.; 31 of them are considered wildfires of note by the B.C. Wildfire Service.

The Kamloops Fire Centre is seeing the largest concentration of wildfires of note, including the White Rock Lake fire between Kamloops and Vernon.

“There are many fires in the province right now and they all pose their own risks and their own challenges and many communities are impacted,” said Hannah Swift, fire information officer with the service.

The province says around 5,650 properties are affected by evacuation orders in B.C. and almost another 25,000 on evacuation alerts.

The White Rock Lake fire continued to grow overnight Friday and into Saturday, especially along the eastern flank of the fire, west of Westside Road, according to officials.

The B.C. Wildfire Service estimates it is currently 550 square kilometres in size. Swift admits it’s difficult to get an accurate read due to smoke and rain creating poor visibility.

The fire has already caused devastating destruction, tearing through the community of Monte Lake and destroying properties.

The overall damage is still unclear, but previously, one resident spoke of watching her home and the homes of her neighbours burn while fleeing.

Many properties have been ordered to evacuate.

While the City of Vernon has rescinded most of its evacuation alert because of reduced fire activity and light rain in the area, the city warned residents that the region remains at high risk and the situation there is subject to “rapid and immediate change,” and some properties in the city are still under evacuation alert.

Swift said people in an evacuation alert area should have a go-bag ready and be prepared to leave.

Strong winds adding to the challenge

B.C. is incredibly dry. There has been little rain in many parts for months on end, creating tinder-dry conditions where wildfires flourish.

Adding to the difficulty, Swift says there have been strong winds in the White Rock Lake fire area. Friday evening they were gusting upwards of 40 km/h, she said.

“Strong winds are very problematic for wildfires. When the wind aligns with certain terrain features it can really accel it,” said Swift.

For example, on Friday, as winds travelled along Okanagan Lake, they gusted up to 50 km/h due to the terrain. That wind then pushes the fire, causing it to spread.

“It really poses a hazard for our crews as well because of the different ways it can push the winds and the changes it can make in fire behaviour pretty quickly,” she said.

Strong winds are expected to continue through Saturday in the area.

A little fall of rain

One of the best tools in a wildfire firefighter’s arsenal is rain. B.C. has unfortunately been in short supply, particularly in the south.

However, Saturday brought some much-needed rain to the Okanagan.

“We’re hoping it will be helpful,” says Philippe-Alain Bergeron, a meteorologist with Environment and Climate Change Canada.

“Whether that’s enough, again, it’s been such a prolonged drought and the conditions are so exceptionally dry.”

He says light rain will continue to fall on and off through the weekend. The area of Kamloops and to the north could also see quite a bit of rain, he said.

However, it is expected to be short-lived. Meteorologists predict a high-pressure ridge will begin to build during the week, intensifying around Wednesday and bringing warm and dry conditions back to southern B.C.

“We have quite high confidence that is happening again,” said Bergeron.

Anyone placed under an evacuation order should leave the area immediately.

Evacuation centres have been set up throughout the province to assist anyone evacuating from a community under threat from a wildfire. To find the centre closest to you, visit the Emergency Management B.C. website.