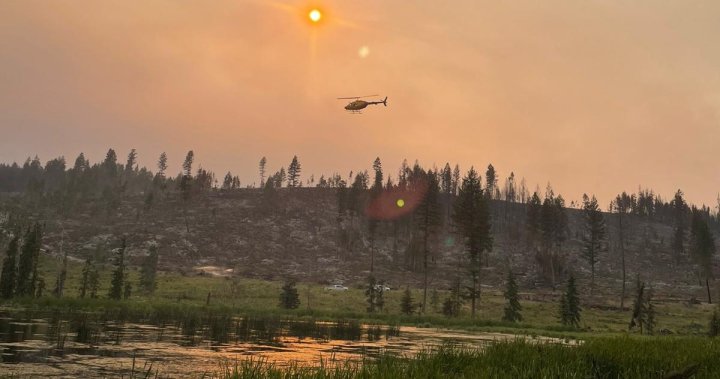 The entire City of Armstrong and the Township of Spallumcheen has been placed under an evacuation alert Friday evening due to the aggressive White Rock Lake wildfire.

The city said this is not an evacuation order but residents should prepare to leave their homes and property if necessary.

To prepare for possible evacuation, visit Emergency Info BC for more information.

The City of Armstrong will update everyone as conditions develop.

It is demonstrating very aggressive behaviour, the BC Wildfire Service said Friday, and strong winds are challenging suppression efforts.

On Friday night, at 8:41 p.m., Central Okanagan Emergency Operations (CORE) said it was expanding the evacuation order “in light of continued aggressive behavior and unpredictable winds.”

Specifically, CORE said “approximately 975 properties previously on evacuation alert along Westside Road are now under evacuation order and must leave their homes and campsites immediately. The affected area runs south from Ewings Landing to the south end of La Casa Lakeside Resort.”

The Village of Chase is also under an evacuation alert, along with part of the City of Vernon.