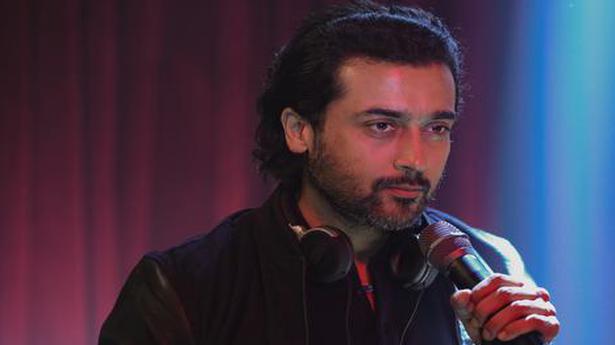 The biggest names of Tamil cinema get together for this Netflix anthology, but the results aren’t for the best

In Bejoy Nambiar’s Edhiri, which plays out like a Christian fable set in West Mambalam, two parallel shots that simultaneously establish the lead characters and their possible relationship instantly remind you of a similar shot in Thalapathi. And Mani Ratnam is credited for the story here. Only later we get the shot’s actual purpose, which is made to toy with our perception of how we perceive the lead characters, played by Revathi and Vijay Sethupathi. It’s a short about forgiveness and hence, a drama is built strongly on guilt and remorse, propelled by a murder. Since it’s about ‘guilt’, PB Sreenivas’ superb ‘Manithan Enbavan’ rolls over the credits. As the lyrics suggest, a character gets a moment that would elevate them to the status of God, only if they chose not to succumb to emotions. The only issue is, Edhiri is too basic, too familiar. Or at least the manner in which Nambiar constructs the scenes. The psychopathology of guilt needed more thought. 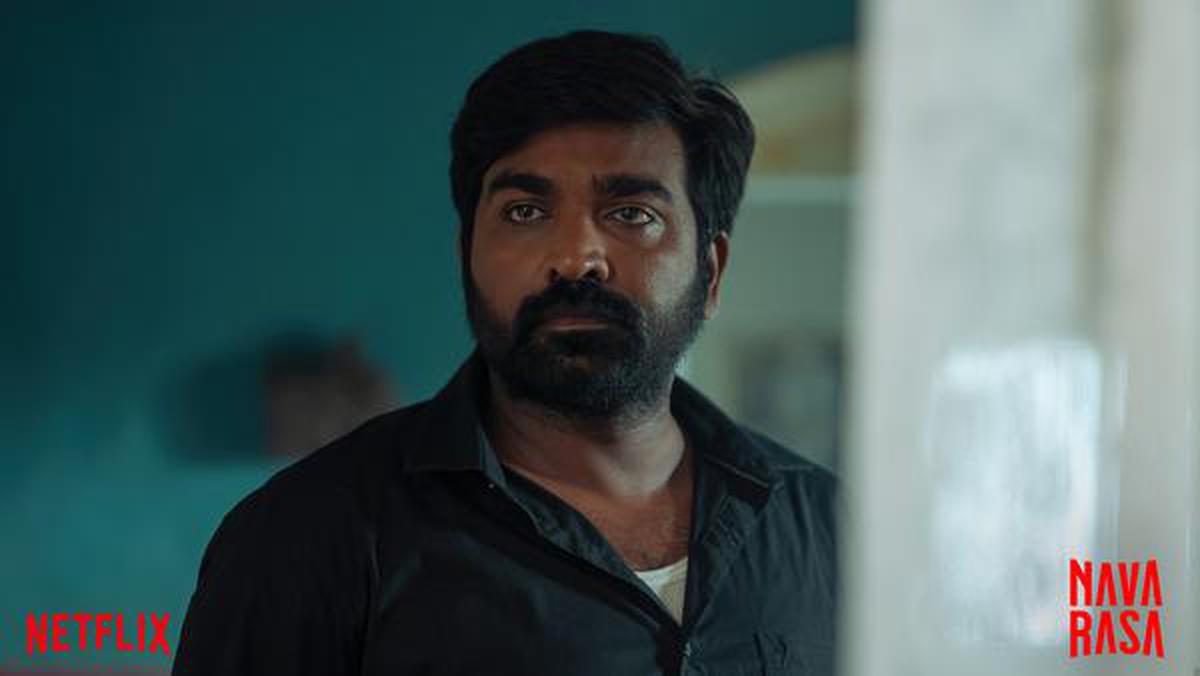 It’s nothing new to Vijay Sethupathi either. He is Dheena here who is on the run for a crime he didn’t intend to, in the first place. Think of Sethupathi’s stunning portion from Iraivi. What Cheenu Mohan says in that film, is what Revathi says in this. Word by word [Dialogues are by Vijay Sethupathi and MK Mani]. Edhiri, in fact, could be argued as a fresh rendition of the character Sethupathi played with aplomb in Iraivi. Given the shorter format, the resolution is too easy. But it does get interesting in the end, where we see not just Sethupathi, but Revathi too bearing the cross. The biggest takeaway is, if ever Bejoy Nambiar remakes Thalapathi, we know who’s going to play what. 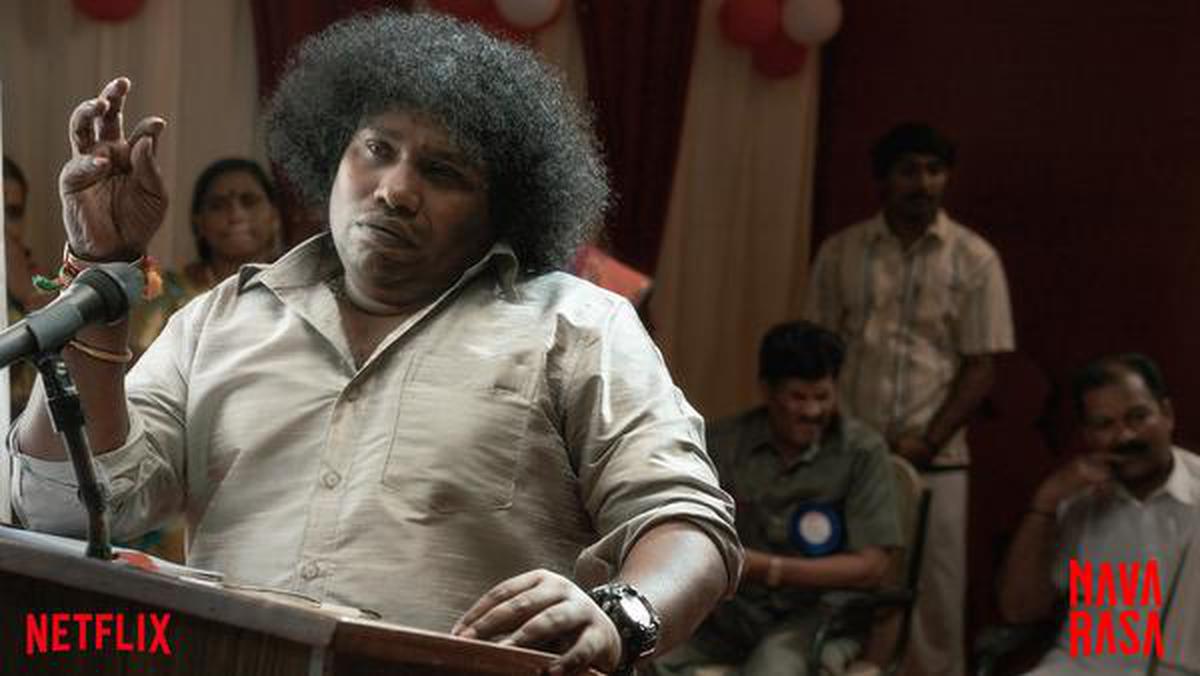 Priyadarshan’s Summer of 92 is where we get to feel the emotion of remorse in its fullest form that was intended by the previous film. The short is supposedly based on a true incident that happened to Malayalam actor Innocent Vareed Thekkethala and we are left scratching our heads, wondering which part of the incident Priyadarshan felt incredibly funny about, compelling him to base his short, that too in Tamil. It’s about Velusamy (Yogi Babu), a successful comedian which sort of mirrors the actor’s real-life, returning to his village to deliver a speech at his school’s centenary function. Maybe due to the format, the short uses a tiring technique of voiceover to establish Velusamy and his memories of the village. “Such beautiful memories,” reminisces Velusamy, looking at the crops and making us realise how badly we miss Cheran. Even the memories that Velusamy shares to make his point about ‘you don’t need to be educated to be successful’ are extremely banal, where caste supremacy and arrogance are made to look like harmless gags. The jokes keep coming in Karthick Naren’s Project Agni. Or should we call it A Brief Introduction to Christopher Nolan’s Wikipedia Page? It could have been a simple film, but is made to look something of profound relevance, just like Chris Nolan’s oeuvre.

Vishnu (Arvind Swami) has found a key to the box that maps our future with the past and present. He discloses this rather important discovery with his friend Krishna (Prasanna), who works at ISRO. Vishnu and Krishna (Another character is called Kalki. Can we get over characters’ names tied to the film’s theme, please?) discuss the creation of the universe and the interconnected lives. Project Agni, on paper, is a high-concept film. Or at least it thinks so by using big, flashy concept-oriented words like Sumerian civilisation, advanced alien programme, doomsday…but the explanation is desi Kodambakkam.

Yes, we get it. Karthick Naren worships Nolan. It borrows heavily from Nolan’s films and perhaps, his interviews as well. The short, though well-made and definitely better than the previous two, lacks originality and vision. It’s about time filmmakers put an end to making fanboy tributes. 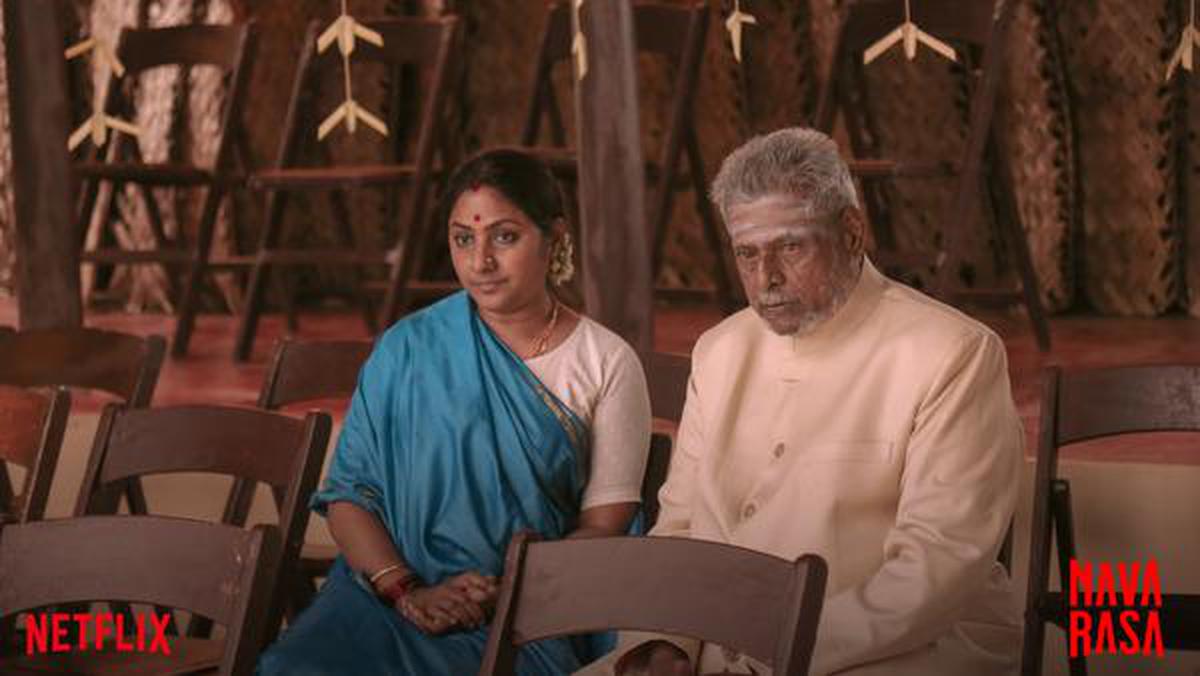 A common trait that runs through the first four films is that each of them begins either with a quote or saying. For instance, Vasanth’s Payasam has a quote by Diane Ackerman. It is a silly way of introducing your film to viewers. Why don’t you let us, the audience, decide what it’s about?

Payasam is anything but sweet. Either the rigid premise or setting (it takes place in 1965) creates a serious disconnect; a wall between viewers and the characters, not allowing us to fully immerse ourselves in it. The short feels slightly out of place when compared with the rest, and is certainly the least interesting among the ones I caught.

Though Vasanth gets the casting right, what he doesn’t is the interpretation of bibhatsam (disgust). Payasam is constructed around a Brahmin wedding and has a character (played by Aditi Balan) who is a widow. Her presence at the wedding casts questionable looks from guests. The rasa would have made sense, had the short been about how she’s subjected to treatment from others. 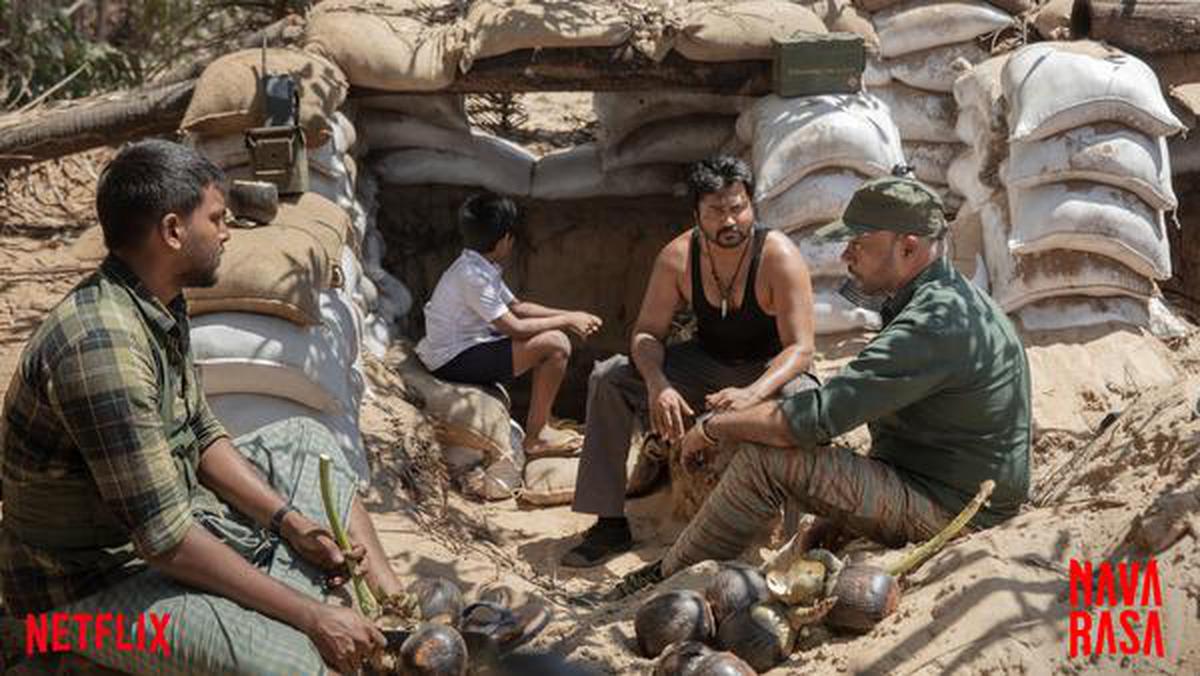 Karthik Subbaraj must have made some sort of peace with himself after the debacle that was Jagame Thanthiram. In Peace, Karthik makes a full-fledged film about Eelam by taking us into no man’s land. And the result? It’s somewhat more engaging than the rest.

Rebels Master (Gautham Menon), Nilavan (Bobby Simha) and Cheran (Sanath) are in a bunker, in the midst of firing from the Sri Lankan Army. Karthik’s film seemed to have been fuelled by this image: of a boy caught in the crossfire. The Tamil rebels encounter the boy who is on his way to retrieve his brother Vellaiyan. We get a surprise when Nilavan goes to the enemy’s camp to bring his brother back.

It helps that Peace involves less talking and more action. Watch out for the 13-minute unbroken shot. It’s the closest we got to 1917.

The children in the Chitrama household are named Anbu and Arul but the emotion that will rule their choices is: aathram (anger). This very-likeable family lives in a congested neighbourhood in Chennai, without enough money to fulfill its dreams. Things change drastically when the boy (played by Sreeram) gets arrested for physical assault.

Why he did and what he did forms the basis of Roudhram, a competent directorial debut by actor Arvind Swami. The film might come across as a basic revenge plot, but the way in which the emotion has been showcased across characters – policemen and the accused – is engaging.

Roudhram also features some neat cinematography (watch out for Santhosh Sivan’s top-angle shots) and music (by AR Rahman; watch out for the violin interlude when the lead family goes shopping) to dig into. Add to that good performances and an unexpected twist in the end, and you have enough cinematic material in the short. 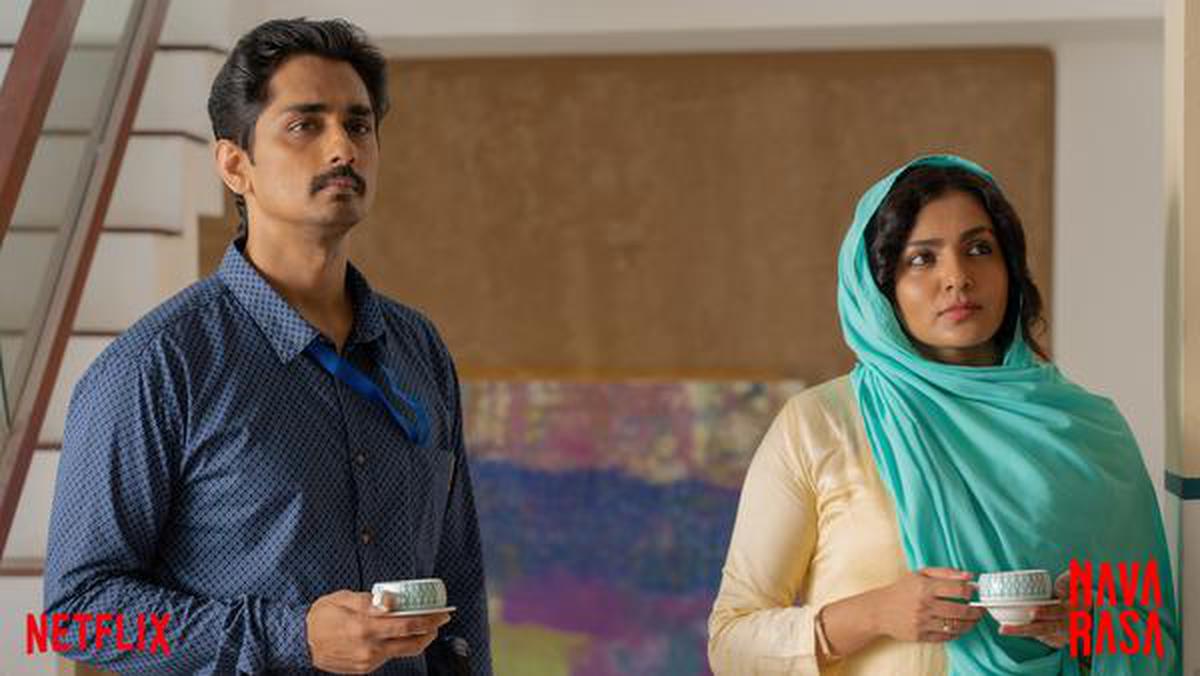 Fear isn’t in your face in Rathindran Prasad’s Inmai. An obvious way to tackle this emotion would have been to take the horror route, but Inmai, starring powerhouse performers Siddharth and Parvathy, takes us through some unfamiliar territory to showcase ‘something that is not there’ (Inmai).

Set in Pondicherry, it opens with some pleasant conversation between the lead pair and slowly veers into the unexpected. Packed with quite some detailing in the flashback portions, Inmai could be slotted in the slow-burn category but with a few pleasant surprises. 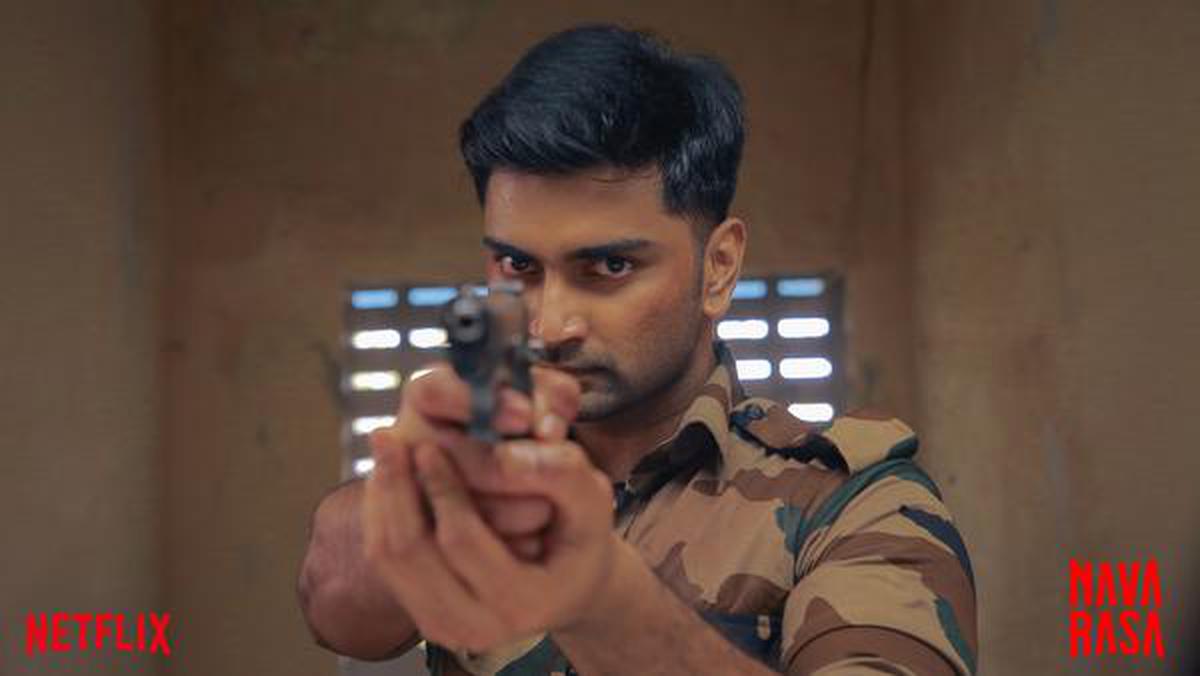 If things were getting a little slow, Thunintha Pin shakes you from the first shot; it is set inside a forest, where Vetri (Atharvaa, a newcomer to the Army) and team is set to take on a bunch of naxalities who think they own the forest. The highlight of Thunintha Pin lies in its powerful dialogues and exchange of words between Vetri and Comrade (Kishore), proving that courage is beyond just about possessing a weapon. The rich sights and sounds of the forest are also bonus attractions in this segment. One just wishes that there was some more weightage given to Muthulakshmi (Anjali) whose perspective of courage seems to be to keep waiting for her loved one to return.

With Guitar Mele Kambi Nindru, director Gautham Menon goes back to the emotion that he enthralled us most with: love. If in Vaaranam Aayiram, it was a case of Suriya’s fondness for his father, here, it is the mother that’s in the forefront. “I need to be in music. I need to leave from here. The only reason I’m here is because of you,” Kamal (Suriya) tells his mother.

A chance meeting with a singer who comes to his studio to record changes his perspective. All the moments between Suriya and Pragaya are quintessential GVM style – the ones we have seen all these years in many of his films. Suriya is charming as a musician trying to find his voice (and love) but Nethra (Prayaga Martin) is a character that isn’t designed well nor executed well. Karthik’s magical score salvages what is missing in Guitar…; he is on top of his game, be it the addictive ‘Thooriga’ or the melodious ‘Ala Alayaga’ or the wonderful interpretation of Beethoven’s popular ‘Fur Elise’. If this was a full-fledged Tamil feature, this would have been the album of the year.

Navarasa is currently streaming on Netflix