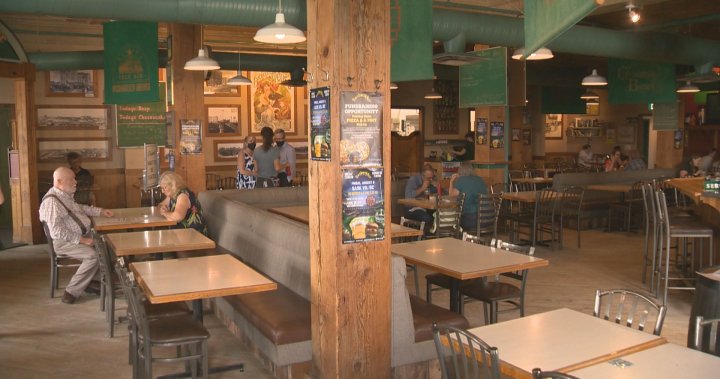 From pre-game beverages and snacks to fan experience, staff at local breweries and game day volunteers are busy preparing for the return of Saskatchewan Roughriders game days.

The Roughriders will take the field for their first game in 634 days on Friday after COVID-19 forced the league to cancel the 2020 season.

Read more:
What you need to know about Saskatchewan Roughriders game day transportation

Pile O’ Bones Brewery just opened down the block from Mosaic Stadium in August 2019, only having a slice of what game day in Rider Nation is like.

“Everyone that can work is going to be working, just because it’s been so long without a packed house that we’re not totally sure what to expect. But we’re excited,” taproom manager Kristin Valgardson said.

“This is pretty monumental for us, being as close as we are to (the) stadium,” Valgardson added.

Kitchen staff at Pile O’ Bones are also busy, adding an extra day of prep work in anticipation of a big crowd on Friday night.

Everything on the menu is made from scratch on Mondays, but kitchen manager Ginger Braaten said crews in the kitchen have been prepping food Wednesday and Thursday for hungry fans.

Kith & Kin at Pile O’ Bones opened in May, so this will be their first big event, however Braaten said staff have extensive catering background and are used to serving large events.

“I think opening during a pandemic was a huge challenge, our soft opening was cancelled due to restrictions, so we opened with hot takeout and slowly progressed from there. I would say this is kind of the epitome of our opening. It’s the largest event we’ve hosted,” Braaten told Global News.

Pile O’ Bones will be serving up a number items on their menu to commemorate game day, including pretzel bites and buttermilk chicken sliders.

Meanwhile, staff at Bushwakker Brewpub are just as busy preparing veteran and new staff for the return of game day rush.

Bushwakker will be bringing back its game day special of a pint and burger honouring the visiting team.

“We’ll come up with a very special burger in honour of the visiting team and invite all the rider fans to come down and devour the competition,” Grant Frew, Bar manager at Bushwakker said.

“This is an event that we’ve been hosting for almost our 30 years of business, a very longstanding tradition and return to the games and returning to our burger and pint day special, I think it gives people a feeling of optimism and hope,” Frew said.

Frew added that there is also fear lingering in the background of what the fallout may be of having 33,000 fans in stands together.

With the province removing all restrictions on July 11, there will be no mandatory masking or physical distancing at the game.

There are 503 active COVID-19 cases in the province after 56 were added on Thursday.

“Returning to Phase 3 and having a full house on a ‘Rider game is — I’ve used this word before — but it’s a surreal feeling. But we’re very excited; we’ll have all of our tables open including our banquet room for extra seating,” Frew said.

Mosaic Stadium volunteers are also gearing for the big game on Friday night.

3:36
Super Bowl snacks made on the grill

Volunteers had a practice run during the Green and White Scrimmage on July 24.

“When we did the Green and White Scrimmage, watching (volunteers) walk in and the smiles on their faces, and the fans’ faces when they walked in, too — everybody’s faces just lit up and it was a really good precursor and lead-up to the game on Friday night,” said Rob Harrison, volunteer and guest experience manager.

There are about 230 volunteers in total with 180 to 200 helping fans out during home games.

“We suggest everybody wears a mask, it just helps keep everybody safer, but if you happen to forget yours at home or you didn’t think you wanted to wear one and you decide you do, we’ll have them available at guest services for people as well,” Harrison said.

“Again, we want everyone to be able to enjoy the game, in their own way, safely and comfortably.”

Tickets to Friday’s game against the B.C Lions sold out late last week. Kickoff is set for 7:30p.m.