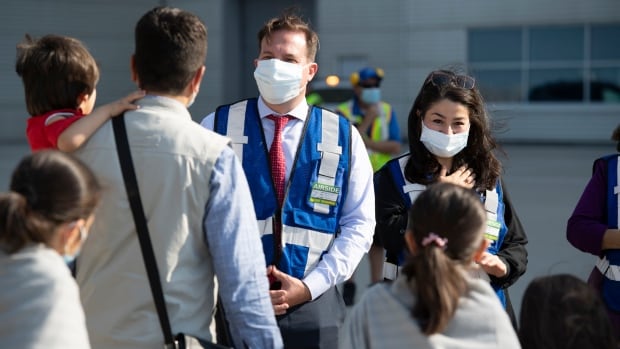 A government flight carrying dozens of Afghan workers who assisted the Canadian military during the war in Afghanistan has landed in Toronto, the federal government confirmed Wednesday evening.

It’s the first flight to arrive under a special immigration program to bring in Afghans as government-assisted refugees.

“Today, the Government of Canada is welcoming the first of a number of flights carrying Afghan refugees who provided crucial support to Canadian Armed Forces members in Afghanistan,” said a statement issued by several federal ministers involved in the resettlement program.

The interpreters and others who helped Canadian soldiers during the war are arriving along with their families. More planes will arrive in the “coming days and weeks,” the government said.

Officials could not confirm the exact number who arrived on this first government flight, which landed at Toronto’s Pearson International Airport, due to security reasons.

They said several thousand people could end up benefiting from an expanded program to resettle Afghans who assisted the Canadian military during its 13-year mission in the country. The program is open to interpreters, cooks, drivers, cleaners and others, as well as their extended family members.

The resettlement effort became more urgent in recent weeks as the resurgent Taliban reclaimed territory and as the U.S. began its military withdrawal from the country.

“The Government has been seized with the urgency on the ground and is working as quickly as possible to resettle Afghan nationals who put themselves at great risk to support Canada’s work in Afghanistan,” the ministers’ statement said.

The arrival of the first wave of Afghans comes after former interpreters rallied on Parliament Hill to demand that Ottawa step up its resettlement efforts.

The program was also mired in controversy last week, when applicants were initially told they would have only three days to apply for resettlement. Veterans and other advocates led a vocal pushback, after which the the government changed the rules.

Now that the Taliban has tightened its grip on the country, those who helped Canada, the United States and other allied countries during the war face reprisals.

Not Left Behind, a group that advocates for the resettlement of Afghan workers, said the flight’s arrival does not mean the program has accomplished its mission.

“The overwhelming majority of interpreters and locally employed staff remain in Afghanistan, and we continue to hear reports of panic and uncertainty caused by the slow progress and repeated gaffes in the government’s response to date,” said Andrew Rusk, the organization’s co-founder.

Wendy Long, director of the group Afghan-Canadian Interpreters, raised similar concerns. Long said she tried to tell the Liberal government about the growing threat to workers months ago, but it was too slow to act.

“If they die in Kabul, that’s blood on our hands,” she told CBC News.

Long said the application process remains too cumbersome in a country where only a small portion of the population has reliable internet access.

“There is not an ability to go out there and download Adobe and fill out this paperwork,” she said.

The government statement said all of the people arriving in Canada through this special immigration program have met requirements on eligibility and admissibility and have passed their security screenings. They were all tested for COVID-19 on arrival and are required to follow quarantine and testing requirements in Canada.