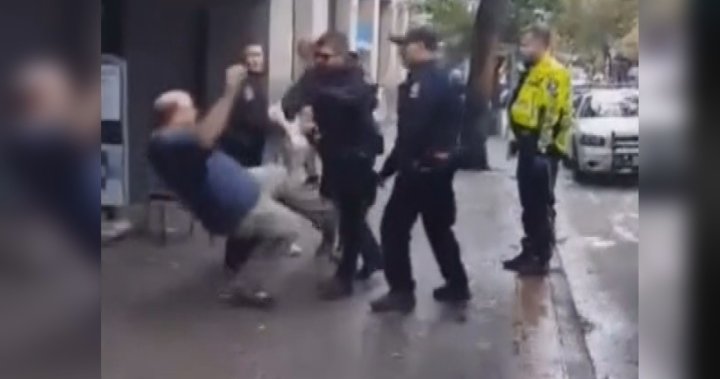 The Vancouver Police Department is facing scrutiny over a video that shows an officer shoving a man to the ground.

The VPD was seen questioning a woman when a man approaches police and an officer pushes him to the ground.

Another officer then approaches the person shooting the video and requests that he hand over the phone as evidence.

“It’s difficult to comment on what led to the apparent use of force by the VPD officer, however, it is very disturbing when you see such an escalated act happen,” Meenakshi Mannoe of the Pivot Legal Society said.

A use-of-force investigation was conducted.

According to Vancouver police, “This incident was investigated last fall by the OPCC [Office of the Police Complaint Commissioner] and was concluded unsubstantiated.

“This video came to our attention this weekend, and so we have now sent the video back to the OPCC for further review.”

The OPCC responded that, “The video may constitute new evidence that did not form part of the original investigation. The OPCC is currently reviewing the investigation in light of the video provided today and will determine what, if any, further steps are required under the Police Act.”

“For folks who have been impacted by police violence there’s not a lot of faith that another VPD officer, maybe someone from their standards division, is necessarily going to investigate it to an acceptable degree,” Mannoe said.

Vancouver police said they won’t comment further on the incident as it is now being reviewed.

Police are not revealing the extent of the original investigation nor are they saying if all of the officers at the scene were interviewed.

It’s also unclear if further efforts were made to obtain a copy of the video or if the OPCC was aware that the video existed.