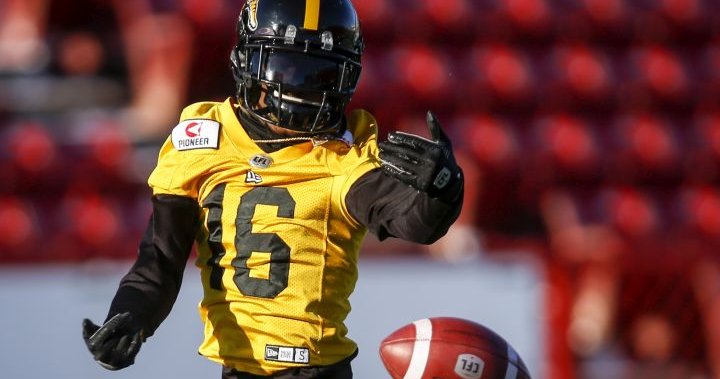 The CFL is resuming play after cancelling the 2020 season due to the COVID-19 pandemic.

The league will kick off a 14-game 2021 campaign Thursday night with the Winnipeg Blue Bombers hosting the Hamilton Tiger-Cats. The two teams met in the last CFL contest played, with the Blue Bombers beating the Ticats 33-12 to capture their first Grey Cup title since 1990.

Here’s a look at 10 players worth keeping an eye on this year.

Williams was the first player taken in the 2020 draft but never got to play as the CFL cancelled the season due to the COVID-19 pandemic. The six-foot, 232-pound Williams hasn’t played football since 2017 when he finished second in tackles at East Carolina with 89 — including three for a loss — with a forced fumble. The 27-year-old is an American by birth but was deemed a national because his mother is Canadian. He declared for the 2020 draft after attending a free-agent workout with Ottawa in 2019.

Jorden has played just one game since suffering a season-ending knee injury midway through the ’18 season.

At the time, he had 55 catches for 944 yards and six TDs. The six-foot-three, 191-pound Jorden sat out the entire ’19 regular season before returning for the West Division semifinal, registering two catches for 15 yards. With the departure of receivers Juwan Brescacin, Eric Rogers and DaVaris Daniels to Toronto, a healthy Jorden would certainly be a boon for Calgary starter Bo Levi Mitchell.

The six-foot-two, 215-pound Fajardo was the CFL’s passing leader in 2019, his first season as Saskatchewan’s starter. The 29-year-old completed 338-of-473 passes (71.5 per cent) for 4,302 yards along with 18 TDs and eight interceptions. He helped the Riders finish atop the West Division standings with a 13-5 record. Not bad, considering he started the year as a backup before being thrust into the starting lineup when veteran Zach Collaros suffered a concussion in the season opener.

He began the ’19 season suffering a concussion in Saskatchewan’s season opener but finished leading Winnipeg to its first Grey Cup title since 1990. And in between, Collaros was traded to Toronto, then Manitoba. The 32-year-old started the Bombers final four games — regular-season finale and all three in the playoffs — posting a perfect 4-0 record, capped by a 33-12 Grey Cup victory over Hamilton. Collaros is the clearcut starter and Winnipeg won’t have Chris Streveler (NFL) or Matt Nichols (Ottawa) as insurance against injury.

The Winnipeg native ended 2019 with a huge bang, rushing for 134 yards and scoring two TDs in leading the Bombers to their first Grey Cup title since 1990. Harris was also named the game MVP and top Canadian. But the 34-year-old running missed most of training camp due to injury and there are questions regarding whether he’ll be ready to start the season. He hasn’t missed a game due to injury the past three seasons and needs 962 yards to become the first Canadian to reach 10,000 for his career.

The six-foot-one, 246-pound Hughes begins his 13th CFL season with his third team after signing with Toronto as a free agent. A six-time league all-star, the 37-year-old has led the CFL in sacks five times, including the previous four seasons. He got to the quarterback 16 times in 2019 with Saskatchewan, helping the team finish atop the West Division and secure a berth in the conference final. Hughes begins the year with 130 career sacks, leaving him seventh all-time.

The 27-year-old signed with Toronto as a free agent. He won four-of-seven games he started with Calgary in 2019 after starter Bo Levi Mitchell was injured. Arbuckle finished 174-of-238 passing (73.1 per cent) for 2,103 yards, 11 TDs and just five interceptions while rushing for 76 yards and four touchdowns. He reunites with Argos head coach Ryan Dinwiddie, who was Calgary’s quarterback coach (2016-19). The Argos are coming off consecutive 4-14 seasons (2018-19) since winning the ’17 Grey Cup.

Nichols guided Winnipeg to a 6-2 record in 2019 before suffering a season-ending shoulder injury. The Bombers acquired Collaros from Toronto and he led the Bombers to their first Grey Cup title since 1990. After being released by Winnipeg, Nichols signed with Toronto but never played for the Argos due to the COVID-19 pandemic and was released. The 34-year-old then signed with Ottawa, reuniting with head coach Paul LaPolice, Winnipeg’s former offensive coordinator. The Redblacks were a CFL-worst 3-15 in 2019.

Banks was the CFL’s top player in 2019 — the first Ticat to win the honour since Danny McManus in 1998 — after leading the league in receiving with a club-record 112 catches for 1,550 yards and 13 TDs. He also ran 13 times for 56 yards and a TD, returned 13 punts for 140 yards, and five missed field goals for 283 yards (56.6-yard average) and two TDs. Banks has excelled with either Jeremiah Masoli or Dane Evans at quarterback and the five-foot-seven 155-pound speedster is expected to again anchor Hamilton’s receiving corps.