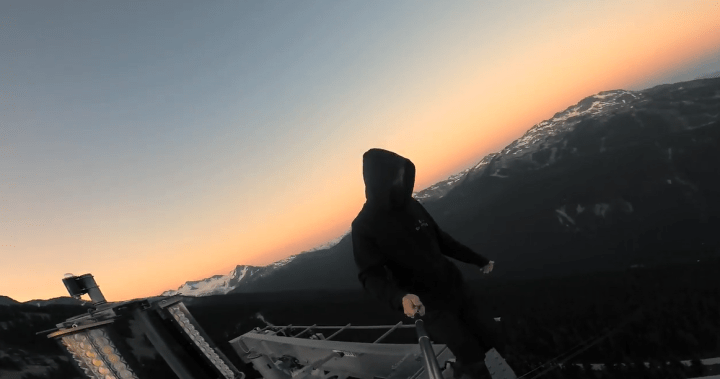 A Toronto-based “urban explorer” is raising eyebrows with a pair of sky-high stunts in B.C. last month, filmed for his YouTube channel.

The climber, who goes by the name ChaseTO, posted videos of himself scaling Whistler’s Peak-2-Peak Gondola, and a crane atop a Vancouver skyscraper in July.

In the Whistler video, ChaseTO can be seen hiking up the mountain in the pitch black of early morning, before scaling a ladder on one of the gondola’s towers at dawn, where he films himself with a selfie stick and a drone.

“I haven’t seen a single video of anyone free climbing the giant supporting towers before so I figured why not be the first?,” he writes in the description, adding that he navigated up the mountain using Google Earth on his phone.

“I was able to climb up and down without interfering at all with the gondola’s regular operation, unlike some of the other stunts that have been performed here before me. It was an otherworldly morning— one to look back upon with great elation.”

Reached through Instagram, ChaseTO said he picked the two structures to climb because they were the tallest he could find during a trip to B.C.

1:48
British Columbians are increasingly risking their lives in the pursuit of the perfect selfie

“I like climbing and making videos / taking pictures.,” he said in explanation of the daredevil stunts.

“The mountain sunrise views were amazing.”

The Whistler video, which has been viewed close to 1,000 times, attracted numerous comments — many applauding the climb, and several saying the climber could have put search-and-rescue crews at risk.

Officials were unanimous in their condemnation.

“The individual trespassed on Whistler Blackcomb’s tenure, bypassed a locked gate and illegally climbed the tower for the purpose of filming himself,” the company said.

“This action put him at extreme risk, as well as had the potential to damage Whistler Blackcomb property.”

Vail said it had referred the matter to the RCMP, adding that its lift equipment is regularly inspected and there was no risk to the public.

Whistler RCMP did not respond to a request for comment.

Sgt. Steve Addison of the Vancouver police described the skycraper video as the action of a thrill-seeker “trying to achieve social media fame.”

“Stunts like this … are extremely dangerous for the people involved and they promote copy-cats,” Addison said.

“They can also put police, firefighters, and paramedics in danger in the event the thrill-seekers get stuck or injured and need rescuing.”

ChaseTO dismissed those concerns, saying he never brings anyone with him that can’t handle the difficulty of the climb.

“I don’t worry about myself, I’m confident in my abilities,” he said.

“I discourage anyone from replicating my videos.”

There have been a number of high-profile deaths around the world in recent years attributed to risky behaviour by influencers seeking the perfect picture.

In July, Sophia Cheung died while trying to snap a selfie at a waterfall in Hong Kong.

Earlier this week, BC Hydro released a report suggesting selfie-takers and would-be influencers seeking social media fame were behind a 200 per cent increase in trespassing on its infrastructure, including transmission towers and dams.