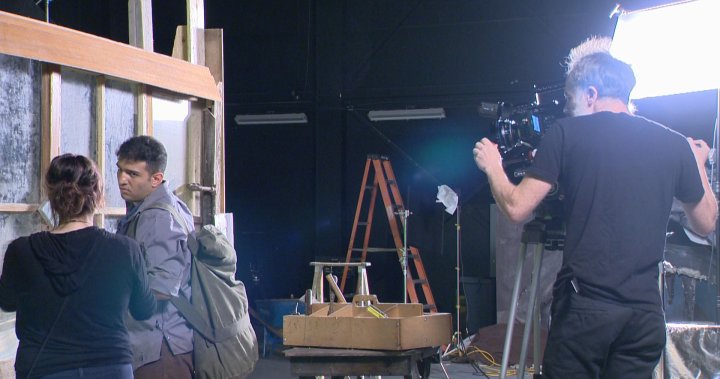 There’s no other film like it in all of western Canada and maybe even across the country.

Fable Deaf is a short film comprised of an all deaf cast, consisting of four characters, however, the film is targeted towards hearing audiences.

The creators of the movie aim to provide insight into the isolating struggles deaf individuals face on an on-going basis.

Deaf Crows Collective, a non-profit theater collective, is producing the film in partnership with Moxie Films.

According to its site, the mission of Deaf Crows Collective is to provide opportunities for theatre performance by deaf, hard of hearing, hearing, and late deafened actors of all ages to celebrate deaf culture, encourage self-expression, and foster relationships between hearing and deaf communities.

“The movie has many different themes, the most important goal of this movie is about the cultural and linguistic genocide for the deaf community,” said Joanne Weber, artistic director for Deaf Crows Collective.

“How the deaf community is figuring out how to persevere, and continue passing along, language and our culture to the younger generations,” she added.

Weber explains that sign language is being pushed aside as more focus is being targeted towards oralism, relying on cochlear implants and hearing aids.

The film, which is being shot in American Sign Language (ASL), strives to shine a light on this issue, that not only deaf people across Canada, but the world continue to struggle with.

“We’re using surreal imagery and some kind of fairy tale, mythological approach to paint a metaphor of what’s really happening in the deaf community,” said Chrystene Ells, director of the film.

“Many movies and many performances are always led by a hearing director and there’s a lot of hearing people making decisions and they don’t understand anything about the culture, the language or the behaviour, and we have a very different experience in our lives,” Weber said.

Fatima Nafisa, one of the characters in the film, hopes audiences will take away the message of inclusion, which is one of the central messages the film depicts.

“You know a whole variety of things related to identity, you just have to accept and respect everything,” said Nafisa.

“Don’t think that we are less than or that you are better than us or you know that, we are the same as everyone else in the world, and we just want that respect and that’s very important,” she added.

But, despite the long hours, a very tight film budget and skeleton crew, both the artistic and film directors are elated to see members come to the set, day after day with smiles on their faces.

The film is slated to be released next fall as the group still has six months of post-production work ahead of them.

Ells also says the team hopes to showcase the movie at a number of different festivals, possibly even some international ones.

Deaf Crows Collective performance and art projects are made possible by generous donations of public and private donors. For information about sponsorship, you can email [email protected]