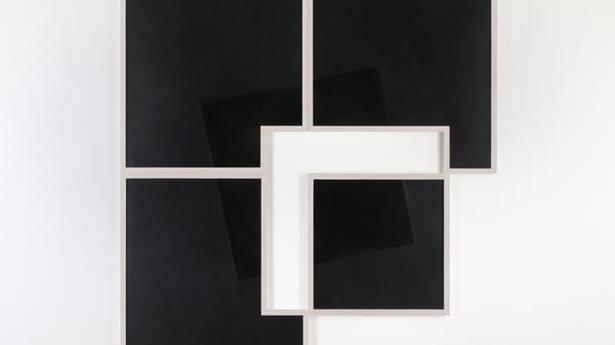 As you walk into the new Nature Morte gallery at The Dhan Mill compound in Chattarpur, New Delhi, two overlapping black squares fix you to the spot with a hypnotic presence. You are pulled into its vortex and, as you move closer, little details swim into focus. The subtle lines that run across the surface of the oil pastel on paper, the heavy gold pigments that become warm and bold, the void and the frame that draw you into a place of contemplation. It is a visual engagement that teases the eye and stimulates the mind.

It is the first time that the gallery is working with artist Parul Gupta, who is known for art ‘born from minimalism’ — they appear deceptively simple at first, and then reveal their complex programs. It is also her largest solo show to date. Still, on the verge… presents a wide range: drawings on paper made with ink, charcoal, oil pastel, gold pigments, as well as sculptures of painted aluminium covered in industrial paint.

In both, Gupta seduces the viewer with the illusion of the ‘doppelgänger’ (the twin form). Her main subject is the square, yet the geometric form is torqued, layered, multiplied, and confounded to create works of heightened tensions. “I began my investigation with the square in 2018. It was a form that fascinated me, yet I was not able to work with it in the manner that I wanted. So, I locked myself up in my studio and decided not to take on any other project until I was able to figure out my relation with it,” says Gupta, 40. The artworks — a selection of which is also being featured on Nature Morte’s online viewing room at Los Angeles’ Frieze Art Fair — examines her interpretations of space and the idea of architecture.

Parul Gupta’s ‘Still, on the verge’ at Nature Morte

Playing with layers and gradation

When Gupta works in architectural spaces, the work she creates becomes part of the space — “it is in conversation with the structural elements and visual vocabulary of that space”. What surprised her, however, was how her engagement with gold pigment, which evoked a sense of the royal. “I used black because of its intensity and ability to frame the empty space in the centre and gold because, visually, it balances and softens the black,” shares the artist, adding that she worked with a professional car painter to apply industrial paint on aluminium.

Her engagement with coloured inks on archival paper is another ongoing experiment. “The gradation of the colours is intentional [based on precise mathematical calculation] since it evokes a sense of movement and interaction with each other,” she tells me. (She had her first auction sale during the second wave, in May — Ink Drawing #15 sold for ₹49,500 at Saffronart’s Art Rises for India auction.) Summing up her non-narrative art, she says, “It is a visual study of geometric, mathematical and architectural elements that impact our ways of looking at our surroundings.”