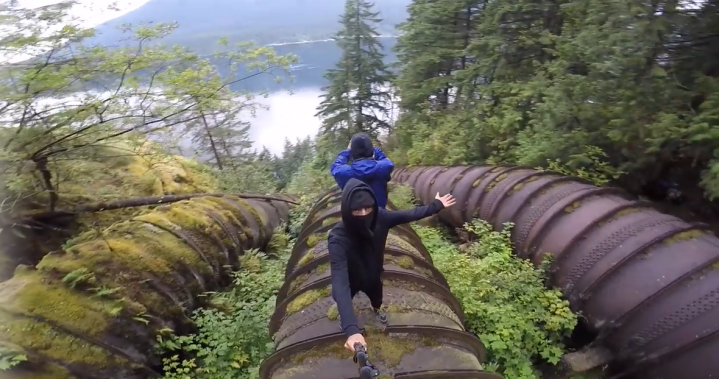 BC Hydro says it is worried the quest for the perfect selfie is leading people to take increasingly dangerous risks on its property.

The Crown corporation says it has seen a 200-per cent increase in trespassing incidents on its property in the past five years, in some cases involving dams, transmission towers or other parts of its electrical infrastructure.

The company says a survey it commissioned this spring suggests “a lot” of the risk-taking behaviour could be tied to attempts to capture photos or videos for social media.

There have been a number of high-profile deaths around the world in recent years attributed to risky behaviour by influencers seeking the perfect picture.

Just this month, Influencer Sophia Cheung died while trying to snap a selfie at a waterfall in Hong Kong.

0:58
Tourists fall to their death after reportedly taking selfie at Portuguese beach

Tourists fall to their death after reportedly taking selfie at Portuguese beach – Jun 13, 2018

About two per cent admitted to hurting themselves while trying to snag the photo they were looking for.

BC Hydro said it believes those numbers could under-represent the reality of the situation, given the number of social media posts highlighting thrill-seeking behaviour.

Risk taking on dams was of particular concern, BC Hydro said, noting dozens of safety incidents and near misses at dams, generating stations and reservoirs in recent years.

“Most of these incidents involve members of the public engaging in ‘daredevil’ behaviour such as cliff jumping, swimming or boating out of bounds and ignoring safety signage and getting to close to active generating infrastructure — and often they document their activities for social media,” the report said.

BC Hydro pointed to several recent incidents, including someone who climbed atop the Buntzen Lake Dam powerhouse to make a YouTube video and someone spotted swimming on the downstream side of the Comox dam while spillway gates were open as examples of dangerous behaviour.

The Crown corporation says it has also documented dozens of cases of people climbing high-voltage transmission towers to take photos every year, an activity it says could easily lead to death by falling or electrocution. It says numbers have dropped since it installed anti-climbing devices.

The company is urging people to stay away from its generating stations and infrastructure, and to obey all signage on its property.

It’s also reminding people to stay on marked trails in its recreation areas, to listen and watch for warning sirens and strobe lights and to stay outside of areas of water cordoned off with booms and buoys.