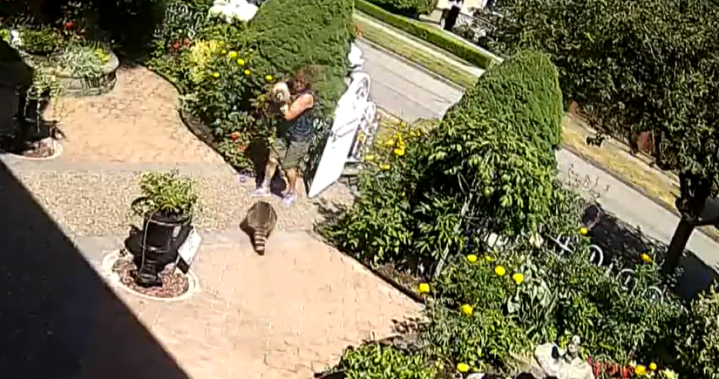 A Vancouver woman is recovering from physical and emotional trauma after being mauled by a family of raccoons last week.

Salete Morgadinho said the incident, which has left her with lasting injuries and unable to sleep, was made worse by officials’ unwillingness to do anything about it afterward.

“I thought I was going to faint and they were going to kill me,” she said.

It happened last Friday on 39th Avenue near Clarendon Street, when Morgadinho took her puppy for a walk around 11:30 in the morning.

She arrived home to find a family of raccoons bathing the her front yard fountain. The dog began barking, and the raccoons attacked.

Morgadinho was able to get out of the yard and close the gate, but the raccoons slid through the fence and continued the attack — only breaking off when a neighbour came and began throwing stones at them.

“My injuries are very bad,” she said.

“The bites … went very deep, especially on the front — as I was kicking him back, he kept coming to the same spot, there is a very big wound that will never (heal) properly.”

It wasn’t the first incident involving the raccoons at her home. Two weeks prior, the animals attacked her dog in her garage, biting it on the legs before she was able to rush out and pull it to safety.

Morgadinho was left with deep bite and claw marks to her leg. She was treated at hospital, and has been staying at her son’s house since the attack.

“Mentally she’s traumatized by it. She can’t think about coming back here to take out her dog.”

As awful as the attack was, the family says it’s the city and the BC Conservation Officer Service’s response that has left them really upset.

Read more:
‘I really did think it was going to kill me’: East Vancouver woman recounts raccoon attack

Morgadinho said when she called the city, she was told raccoons are not its responsibility, and that the raccoons had been here first.

Conservation officers took the matter more seriously, the family says, but have yet to send anyone to investigate.

The City of Vancouver told Global News that issues related to wildlife, including raccoons, are a provincial responsibility.

The Conservation Officer Service said that raccoons are not part of its “primary mandate,” though in the case of an attack it may attend and “provide advice on how the animal can be dealt with.”

Both the city and the COS advised residents with concerns to consider hiring a private pest control company.

The Morgadinhos say that response is not good enough.

“If my dog had attacked another dog my dog would be put to sleep. How can a raccoon, who is a wild animal, be more protected than the humans?” Salete said.

“It’s serious enough that yes, it should be taken care of,” Rob said.

“I understand they’re not going to be able to take care of every racoon in the lower mainland, but in cases where the raccoons are attacking the resident or the animals or whatever? It should be taken care of.”