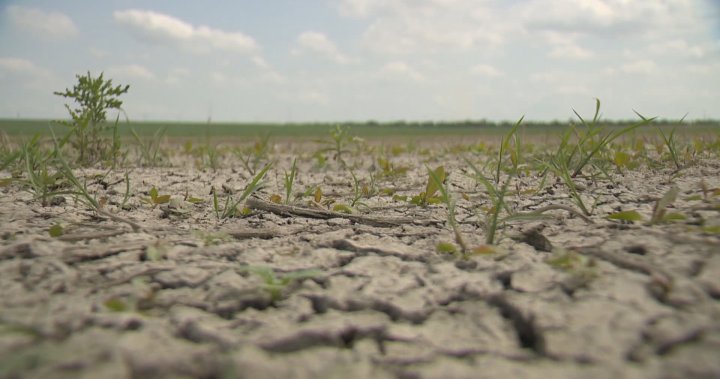 The Agricultural Producers Association of Saskatchewan (APAS) is reaching out for recognition from businesses in the agriculture sector.

Since producers are facing devastation from drought, they are looking for some flexibility from others.

“Obviously we know that producers are going to be facing some challenging times here financially in the near future and in the long term and we’re just hoping that the businesses that do business with producers can be flexible and hopefully, in the long run, we’ll be able to come up with some workable solutions on both sides of the table,” said Bill Prybylski, APAS vice-president.

The damage to crops is causing a domino effect of concerns within and around the agriculture sector.

Read more:
Crops in Saskatchewan ‘extremely stressed’ due to heat, lack of moisture

Yields and quality for many farmers will be low, and some crops have already been plowed under since they are not flourishing.

Bills keep coming in for producers and if they have no crop to sell, then they are projecting to be in a very tight financial spot come next spring.

“The crops that are damaged are likely beyond recovery this year,” said Prybylski.

There will also be a shortage of feed and water for livestock, which will drive up costs.

“The livestock sector is going to feel the pinch very quickly here as cattle start running out of feed and if alternate sources of feed aren’t available, they’ll be forced to liquidate their herds,” said Prybylski.

“It may take years for them to rebuild those herds if they have to sell off now.”

Having to liquidate may also cause some producers to get out of the business, which means there will be a large hit to rural economies.

Many farms have been around for generations and have stayed within the family. However, Prybylski says if young farmers are not able to sustain payments, they may be leaving for another job possibly in a new location.

“Farm families have been the back bone of this province right from day one and we really can’t afford to be losing anymore farmers, especially young farmers,” said Prybylski.

APAS has also reached out to the federal and provincial governments for funding and additional supports twice. They say, they are playing the waiting game to hear back from both parties.

Producers will be getting some financial support from the Province of Saskatchewan to help offset the payments that come along with drought.

Low yielding crops will be allowed to be put to alternate use to support the livestock sector.

The provincial government is also making changes to temporarily raise the maximum funding a livestock producer can receive from the Farm and Ranch Water Infrastructure Program (FRWIP) for dugouts, pipelines and wells.

There are problems for farmers that may arise every year such as not enough rain, too much rain, insect problems, or diseases.

Many people are saying, this may be the largest drought in western Canada in over 30 years.

“It’s been a long time. 1988 is kind of a number that people have been throwing around,” said Prybylski.